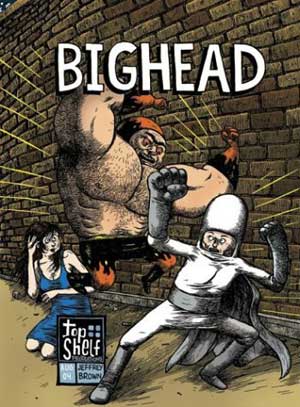 Taking the conventions (some one would call them silly) of superhero comics, in particular the capes and tights, and making fun of them is not exactly something missing from comics. A lot of people (including those who create them) love comics but are embarrassed enough of them to hate them and create comics that make fun of (superhero) comics. Some love superhero comics enough to want to playfully and gently poke fun of superhero comic conventions. Jeffrey Brown’s BIGHEAD falls in the latter category.

Throughout the book, a collection of Bighead mini-comics, the title character saves a thankless world. He faces the gravity of his dire situations with both aplomb and disdain. It’s as if his adversaries, for all their awesome power and potential for danger, are in the end just as insecure as he is. The fact that he is aware of his imperfections (or doesn’t care) gives him a leg up on the villains.

Best of all, Bighead is all funny. With its crude art and sudden narrative shifts, these mini-comics make one long, pleasurable little graphic novel. Mostly a parody, but with brief farcical flourishes, Bighead is something rare, a superhero comedy not ashamed of being a superhero comic, even if the super characters seem rundown and running on empty. B+