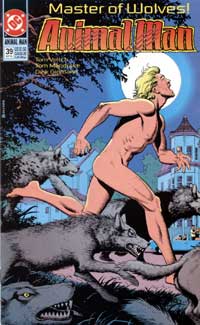 Delano's stories set the tone for the emerging Vertigo line where the mature series published by DC Comics were given an imprint of their own and removed from the regular DC continuity.

Animal Man started as B character in older strips published by DC Comics. He reappeared briefly during the Crisis and was given his biggest break yet in 1988 when Grant Morrison wrote a new series starring Buddy Baker, his family and other oddities. As is the practice with DC Comics, Buddy Baker, the Animal Man was inducted into the Justice League to push sales of his series.

Animal Man didn't stay long with the European branch of the Justice League. The man who could adopt the characteristics of animals as his own adopted those of a distant cousin of Willie Coyote. Morrison, always experimenting, began to confuse the lines between reality and fiction. At the time, critics lauded this as a step toward the literary progression of American comic books.

To match Morrison's madness and imagination, Rich Veitch, DC gave another creator known for his experimentation the task of writing Animal Man. None of his material was exceptional, as purposely trying to be weird does not make good writing. After Veitch's run, Jamie Delano, the writer of the updated version of John Constantine Hellblazer became the new writer. 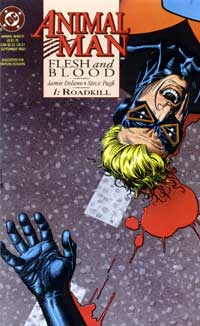 Delano's run was used as one cornerstone of the new Vertigo imprint. The problem with much of the early Vertigo material was that copying Swampthing or Sandman was considered great writing. Delano made Animal Man an animal elemental. During the 1980s and 1990s, elementals were very popular. They were the spiritual undercurrent fuelling heroes.

Being an Elemental means that a character is the representative or avatar of a hidden mysterious force. Swampthing was a plant elemental. Firestorm, a fire elemental. Even the Flash has become a speed elemental. One could say that being an elemental, for DC comics, is the equivalent of being a mutant for Marvel. It's an instant sales guarantee.

Fortunately, there was more to Delano's Animal Man. It was well written and one of the first series to infuse so much literary style to captions. Like many of today's comics, Animal Man's inner voice, became the narrator of the series. However, Delano also added traditional but very polished third person narrations. 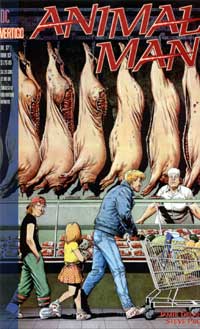 The problem with very narrative writers is that the visuals, even when strong, as for Steve Pugh's work, tend to be overwhelmed by the captions. The pace and the storytelling are no longer dependent on the strips, but on how fast one can read all Delano had to write. It's like reading an illustrated book. There is little interaction between the texts and images.

Pugh's work has a texture and a thick inking line that give it a splatter quality. There is a hint of cartoonish styling, but more realistic than Adam Hughes. The splatter effects of his inking resemble Gil Kane's work, not in style but dynamism. It makes the elements leap from the page and look in motion, stopping Delano's writing from overpowering the book.