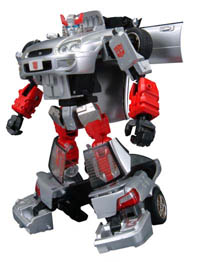 It's surprising to say, but I've only discovered this line this week. I stopped collecting Transformers and G.I. Joes when I began concentrating on DCDirect, Marvel Legends and Marvel Select figures. It's tough being a collector these days. One must specialize. Nonetheless, the Hasbro/Takara's Transformers Alternators are exactly what I've always wanted.

I'm a Transformers fan from the 1980s. I grew up with them. I got far more Joes than Transformers as a kid. All I got was Shockwave, Cyclonus and some Gobots. Later, I got myself some Generation Two repaints such as Jazz, Starscream and the black Sideswipe. I love Transformers, but I have to admit that they have always been difficult to collect.

Whereas, three years ago, I completed my 20-year-old G.I. Joe collection with auction sites, garage sales and flea markets, I've not even tried to assemble a similar Transformers' collection. While repainted Joes are fine with me, repainted Transformers are rare and just not sexy. Compared with their stylized televison counterparts, TFs toys look sluggish and bulky. 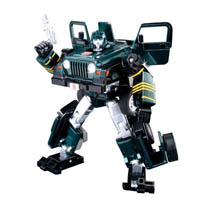 I fell in love with the stylized designs in the cartoons that have become the basis for Dreamwave's comic book reboot of the franchise. Generation One Transformer toys look nothing like that. The other problem with Transformer toys is that I'm really just interested in the old characters. Hasbro has never convinced me to buy by using the name of an old character with a new one.

Hasbro, or should I say, Takara, the Japanese company responsible for the design and creation of most Transformer toys has noticed that I wasn't the only one not buying into the new Transformers released since 1996's Beast Wars. Alternators, called Binaltech in Japan, are 1/24 scaled cars Transformers featuring abundant details and better designed robot modes. 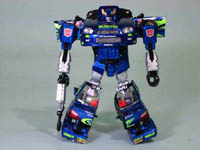 The first Transformer Alternator has been Smokescreen, the diversion tactician of the Autobots. Back in 1984, like his fellow repaints buddies, police car and second in command Prowl, and the cocky, indecisive talkative but quick, Autobot Blue Streak, he was a Datsun Fairlady Z. He's now a Subaru Impreza WRC 2003. He sports the colours and the ads of the real rally car.

Hasbro and Takara have sought licenses from car manufacturers for Alternators, unlike the original Generation One Transformers. Car modes, including, dashboards, tires and seats, are accurate. Whereas there was nowhere to fit a human, in old Transformers, a human driver, provided one finds a compatible figure with the appropriate scale, can fit within an Alternator. 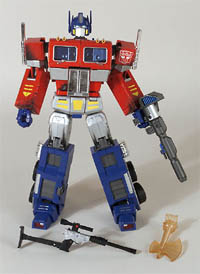 Hasbro and Takara have announced more. There is a commemorative 20-year-birthday Optimus Prime, apparently in the same scale, although it seems to lack room for human drivers. It will be available in early 2004 but can already be ordered from Japan and North American shops who export Japanese toys. The toy makers have not officially added him to the Transformers Alternators' line.

Since repaints have always been part of the Transformers' experience, the first repaint, Silver Streak has already been announced. Silver Streak is for all intents, Blue Streak with a new name. Hasbro must have lost the license to the name. It is an urban version of the Subaru car with the classic silver paint and modified parts such as a new rear tails and a new head. 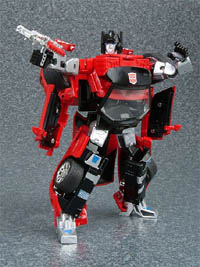 Other characters announced by Hasbro and Takara are Sideswipe and Hound. Fans have seen a blue Corvette which has led many to speculate that it will be the Autobot known as Tracks. Sideswipe is no longer a Lamborghini but a red Dodge Viper. Hound, the tracker of the Autobots is an updated Jeep Cherokee instead of a Mitsubishi army jeep. 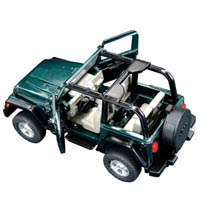 Other models are easy to do. For example, Hoist, the Autobot's trailer is exactly like Trailbreaker except for his grappling gear. Inferno and Grapple are the same too, although I'm not sure we'll get a fire truck! Ratchet and Ironhide, the minivans, have the same toy mould. Gears and Brawn, are similar small utility trucks with similar transformation.

Others would fit, but would stretch credibility. Sunstreaker, like his brother Sideswipe, is a Lamborghini Countach. Traditionally, their robot mode was different. A better base would be a racing car Wheeljack with sponsors' logos and an urban-themed Sunstreaker. Their robot mode is closer. The only drawback is that Sunstreaker and Wheeljack are not "brothers."

Other characters may give Hasbro and Takara some extra problems. Whereas most fans accepted Smokescreen and Sideswipe's new car mode, many associate characters such as Jazz heavily with their car make. An Alternator Jazz that's not a Porches would not work. Jazz' also had a unique sculpt, limiting the number of characters that can be modelled after him.

Fellow Autobot Cliff Jumper is also a Porches, but a different model and with a different transformation theme. Cliff Jumper would probably work best as a repainted sports version of the new Volkswagen Beetle that is essential for the new Bumblebee! Both are about the same size and a better fit. I really hope we can get a 1/24 New Beetle Bumblebee and Cliff Jumper Figures.

Other Autobot cars with unique moulds would be difficult to design as a single model because they are not as popular as others. For example Windcharger, Skids and Beach Comber, would make great models, being respectively a Trans Am, a minivan and a dune buggy. Let's hope Takara and Hasbro offers us some of those unique Transformers as Alternators.

Since learning about the Alternator line, fans have been requesting Decepticons. The most obvious request is a series of F15 jets. There are six F15 Decepticon jets. Hasbro and Takara could get much mileage with but one model. Some have suggested that the models should be a smaller scale. I beg to differ. A 1/24 line of Decepticon jets is critical. 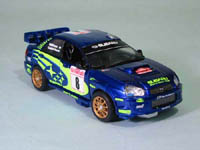 Another easy set for Alternators would be recorders/ghetto blasters for Decepticon Soundwave and Autobot Blaster. I'd like to see mini-cassettes, but if we're gonna update the line, how about a series of mini robots shaped like Flash cards or memory cards plugable into an MP3 player/cd-player. Also this time, I would appreciate accurate scales on the characters.

Some figures seem almost impossible to recreate accurately. Megatron, the Walter gun creates a legal problem because laws forbid toy makers from making toys too similar to real weapons. All attempts by Hasbro and Takara to update Megatron, the Decepticon leader as a tank have felt flat for me. Can't they use an appropriate hand weapon like a bazooka or something?

The Transformers Alternators from Hasbro and Takara come in two variety. Takara, the original mould maker produces its Binaltech Transformers with die-cast metal pieces. They are heavier and some customers report paint chipping in friction areas. Hasbro's models are all plastic which makes them lighter but also cheaper. Hasbro's Alternator cost about $20 a piece.