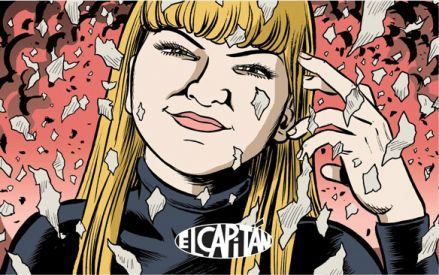 Full disclosure: I am writing this review of Stray Bullets: Sunshine and Roses #15 with a slight hangover. Not the “I’m gonna vomit kind” but the “I have a headache and know a nap is in my future” kind. It’s making for an interesting mood to be writing about the sprawling, uproarious world of Stray Bullets, but it’s not all, as the subtitle would suggest, sunshine and roses. Perhaps I’ll edit this after I have a Caesar (for our American friends, a Caesar is a Bloody Mary but better because it has more salt and more clams. I’m not kidding).


If you’ve never read an issue of Stray Bullets, I would usually tell you to start with the latest issue and work backwards. Lapham is pretty much the grandmaster of “serialized stories that tie into a bigger universe.” From there, you could pick up the omnibus of the first 41 issues, the ones before the move to Image Comics, and get all caught up on one of comics’ most underrated crime stories. That’s most times, but this issue is not that jump in kind of issue because it’s a bloodbath. And, being Stray Bullets, the bloodbath isn’t a fun action romp. It’s disturbing.

The violence begins on the second page and only escalates, starting with verbal assault and ending in a nightclub shootout. I don’t think anyone buys a crime comics expecting all-ages fun, but things get out of hand very quickly, playing out as excessive, sensationalized violence that leaves your stomach turned. And the fact it’s disproportionately affecting women, a theme in this entire arc that I don’t very much appreciate, only compounds the problem.

At it’s core, Stray Bullets isn’t about the circumstances that lead to crime, a mainstay in neo-noir like Criminal, but the traumatic ripple effects of random violence. Its world is made up of monsters, manipulators, and bystanders trying to take charge. Perhaps this level of violence was always inevitable, given the arc is about a botched heist, but Lapham’s cast has become unbalanced towards the monsters, not the miscreants, and in that problems arise.

Since the usual monster, named Monster, was given a humanizing arc earlier in this series, Lapham has set out to turn a new character, Kretch, into one. Besides having the opposite story to Monster, his proximity to the manipulators and miscreants makes him worse than Stray Bullets usual bringers of doom and death. Spanish Scott, for example, it almost always on the sidelines, popping in to deliver chills before fading away, like a monster under the bed. Kretch is the "deal with the devil" sort of monster, and his presence is doing the series little favours.

With Kretch pretty much integral to the plot at this point, and Spanish Scott being a heavy presence as well, this particular issue is mostly about bad men exploiting women for leverage or information. It comes in three forms: verbal abuse, physical assault, and suggested torture. Whereas many Stray Bullets issues take time to look at and through the violence it depicts, and none of what I've listed is new territory for the series, there's simply no time or space to be critical and self-reflexive. Yes, all of it is bad guys doing bad things, but it’s also exclusively against women (and unnamed gang members). For a series that’s full of flawed but amazing female characters, letting purposefully underdeveloped monsters run wild for a whole issue is dangerously self-indulgent, really unnecessary, and doing a disservice to the series itself.

The art, however, seems to recognize on some level that it’s handling a lot of heavy subject matter with little grace. As things escalate in each of the stories, Lapham’s strict 8-panel grid begins to jump back and forth. At the beginning, the plot and subplot each get a full page. At the height of the action, locations switch panel to panel. You’re left disjointed and confused. Violence happens in such a flurry of lines that it’s difficult to distinguish, or zoomed in so close it’s almost visceral, and equally difficult to decipher. It's purposeful and masterful, showing that while Stray Bullets has always had a consistent look, Lapham’s many years of experience have given it a critical eye and maturity. Black and white comics are increasingly rare, but Stray Bullets is proof positive that they still have a place in the modern world.

This issue is not a great example of Stray Bullets as a whole. In the context of its overarching story, it’s just fine, with many of the pieces coming to a head in a bullet-ridden climax. But as a single issue, this is a wait for the trade sort of situation. There's goods news though: the next issue sets itself up for the next act of the "Sunshine and Roses" story, and that will hopefully put the series back on the right track.