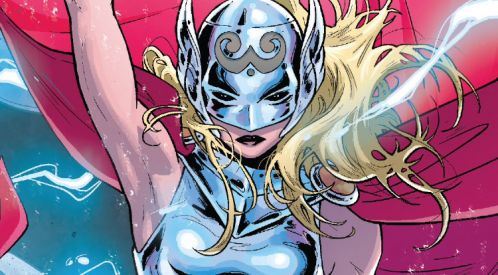 Jason Aaron remains one of the hottest writers in comics right now and his new series with Russell Dauterman is easily the most talked about Marvel Comic book release of the season. The Odinson is unworthy. Mjolnir has a new wielder, and Thor (the book and the character) will never be the same.

What's Happening: Nick Fury whispered the words to Thor Odinson that revealed Thor's unworthiness (at least for now) to wield the Mighty Mjolnir. After spending a unwieldy amount of time trying to lift Mjolnir with his now unworthy hands, Thor leaves the moon (where Mjolnir was dropped by Thor after Fury's secret revelation at the end of Original Sins) and sallies off on one of his flying goats to battle monstrous Frost Giants who are rising from the depths of the ocean floor to challenge humanity. Thank the gods someone else has proven worthy enough to lift Mjolnir as Thor proves to be no match for the Frost Giants without his trusty hammer.

The Writing: Jason Aaron has always been a champion of women's rights, as strong characters to say the least, in his works, and his Freyja is shaping up to be another in a long line of them. Is she the one who has picked up the hammer though? Panel progression and dialogue definitely hint that this may be the case, but that would be too easy (and lazy) for a writer of Aaron's skill. No, I think that the Freyja hint is a red herring...but who knows? I've been wrong before. Aaron is usually pretty subtle about his politics and authorial intent in his works, often disguising them with humor and intelligence, and he does so again here for the most part, but he really hammers (no pun intended) the point home that Odin is a misogynist pig. His dialogue is way over the top. Yes, Mr. Aaron we get the point that Odin is a jerk, he obviously can't lift the hammer so why do we even need half a page devoted to his futile attempt? Oh, it's meant to demonstrate that Odin is not on a misogynist pig, but an egotistical one as well. I think we can make that logical jump. Despite the heavy handedness, Aaron is doing what he does best here though, and I love that he's championing female relevance and strength with this story and title. It's something the Big Two need right now. I mean how cool is it that he's turned the most masculine character/title on its head by having a woman wield the hammer? Brilliant as always, even if Aaron feels like he has to REALLY spell it out for us...

The Artwork: I was convinced that I would not like the artwork in Thor #1. Esad Ribic's artwork in Thor God of Thunder was so amazing and lifelike that it ranked up there with the other great Thor artists over the years (Simonson and Coipel). This triumvirate of great Thor artists might just have to make room for another one though as Russell Dauterman has already demonstrated, a mere one issue in, that he has what it takes to take on the grand scope and theme of this new Thor series. His attention to detail mixed with his beautiful anatomy and facial work is the perfect blend of Jim Lee and Esad Ribic. Just like the recent great Thor runs have been, this new Thor is going to be a feast for the eyes.

The Verdict: More than a marketing gimmick (albeit a marketing ploy no doubt) this temporary (however long) replacement of Thor Odinson with Thor The Goddess of Thunder is going to be, like most of Jason Aaron's works are, the must read of Fall 2014 and beyond from Marvel Comics.