The Canadian mutant superhero known as Northstar is the twin brother of Aurora. Both a French Canadians from Quebec who accepted to join Canada’s Alpha Flight and fight the good fight. While part of his profile, seems out of character and a juxtaposition of every Canadian clichés, Northstar is a popular enough character who changed from being the toke French Canadian to being Marvel’s gay icon. Introduced in X-Men #120 along with the Rest of Alpha Flight, Northstar was tasked with returning the defecting mutant hero Wolverine to Canada.


There have been quite a few Northstar action figures over the years, at different scales, often coming with the rest of Alpha Flight, and often with his sister, Aurora. Of the two, Northstar is the better known, and the fastest. In theory, he should be faster than X-Factor’s Quicksilver. The current Quicksilver action figure came with the exclusive Amazon Marvel Legends set by Hasbro in 2019.
Likeness

This could be the best Northstar action figure to date. This is quite an easy feat for Hasbro as the old Toybiz releases were quite poor. The 2015 Marvel infinite Series four-inch Northstar was as poor looking. The most important part of nailing the Northstar look is his face. He kind of look angry, like Quicksilver, and has impish ears. He’s like a younger Namor with a boring haircut. Hasbro nailed the face which is great. The suit is classic Northstar with the star and frost pattern.

Northstar uses the Spider-man 2099 mould which has also been used for the Family Matters Quicksilver. The problem with this sculpt is that the feet are too big, but do help stabilize his as he is a runner. He looks lean too. Unlike the gigantic and ridiculous head on the Quicksilver figure, Northstar’s is well-proportioned. A peg hole on the back would have been useful for this figure as Northstar can fly. One complaint that I have is that the set did not come with open hands, which are useful for a flying figure. But you can probably switch and match with Quiksilver’s grasping hands which are more silvery than white. They may not fit as well, colour wise. The face sculpt has a bit of plastic grime and trash on one cheekbone. The hair is glued on.

Hasbro chose to use a white plastic and to paint the black parts over the figure to remove the soft edges that would have been created if the base plastic was black. Thus, the edges of the stars are sharper than and clean. The black paint covers the figure well enough. Hasbro did not use face painting for the figure, so the face while sharp with beautiful eyes is dull. The white is not pure white but pearly. I’d rather a pure white base as this one will yellow quickly if exposed to sunlight. There are no blue highlights in the pitch-black hair. 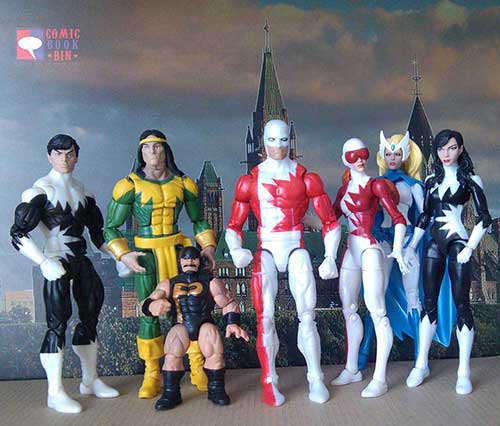 Northstar is a bit shorter than Guardian and Shaman but will fit well with other Marvel Legends action figure. He looks weird next to Quicksilver who has gigantic noggin while having the same body. You can tell that Northstar was designed to be part of an ensemble piece and of course, he looks good next to his sister Aurora.
Stability

Northstar is stable thanks to his huge and flat feet. He is easy to pose and stable when not standing upright. He can still topple easily if not well-balanced but is not top-heavy.

He has articulations in the ballpoint head, flexible butterfly joints at the shoulders. He has shoulder articulations that can rise at about 75 degrees. There are bicep curls, double elbow articulations that you may want to reheat before you use them. His wrists have inside and extending palm crunches. His abdominal crunch is good and hides the base white paint well. His waist twist shows the white base plastic but still twists well. Northstar has thigh curls and double knee articulations. His ankles bend up and down as well as swivel on a ball-peg.

Except for his head, minus the hair, all of the base plastic is the pearly white PVC that will yellow in sunlight, so be careful when exposing Northstar to direct light.

None of the figures in the set came with props which is not great. Hasbro should have included alternate hands for flight for Northstar, Aurora, and Vindicator. Snowbird should have come with white northern animals. Hasbro has all these sculpts lying around but does not use them. Even a base with a Canadian flag would have been cool for the set.

The packaging is exceptional with a comic-base box with short biographies in the inside cardboard cover and pictures of the set on the back cover. Each figure was wrapped in this big plastic shell. The cardboard flap has no Velcro to attach to the rest of the box. The packaging still, is very beautiful.

The price in this set fluctuates on Amazon. It can be as low as just above $100 CAD or as high as $170 CAD on Amazon Canada.

Amazon USA has run out of the Alpha Flight set that included Northstar which came out in 2019. Amazon Canada has plenty left for the time being, but they mess around with the price constantly. You must watch for a good sale before jumping in, if you don’t want to overpay for the set. Of course, individual figures can probably be bought in auction sites or from collectors. The set will not be available forever at Amazon and I doubt that they’ll release a new Northstar soon, unless there is a major comic, movie, or Disney + announcement.