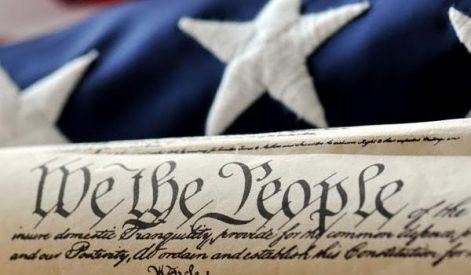 Yes, the American experiment might have suffered a serious setback on November 8th 2016, as a misogynistic, vindictive, and racist television star and failed businessman was elected to the highest office in the land, but there are still plenty of us who believe that we are still stronger together, continue to embrace the audacity of hope and have no intention of leaving the land we love for the faux "safe haven of Canada."


Things might look dark now, but as many Canadians will see if they turn on their televisions or tune into their Facebook feeds, our vibrant right to peaceful protest, a right that no authoritarian will ever be able to take from us, is being exercised in the streets of New York City, Chicago, Seattle, San Francisco, Tempe, and other cities across the United States in reaction to this election. Yes, there are dark elements in our society that fear the other, hate what they don't understand, and feel an unjust and illogical superiority over some of their fellow men. Yes, the United States has a dark history filled with the accepted mistreatment of minorities. The United States has a strength that allows it to continue to grow, mature, and atone for its original sins though. This strength is rooted in its free press and its Bill of Rights. This strength is rooted in the fact that it remains the ultimate land of opportunity as well as diversity, even if we do have a buffoon about to take over the presidency for a relatively short time in comparison to the life of the nation.

This strength is rooted in the fact that even as Donald J. Trump was being elected to the presidency, four women were simultaneously being elected to the United States Senate...as Democrats (the party of opposition to Trump). Tammy Duckworth, the Democratic Senator-elect from the State of Illinois, is not only a woman, but a disabled veteran of Thai-Chinese descent. We also still have progressive senators like Al Franken, Elizabeth Warren, and Bernie Sanders residing in the Senate. Yes, their party is in the minority, but it will remain a strong and vociferous one.

Finally, this strength is rooted in the fact that even though the most deplorable of candidates has been elected to the presidency via the electoral vote, he doesn't have the popular vote. Some see this as a foolhardy development, but I see it as yet another genius mechanism of the American system of government. Even in defeat, the losing candidate's stated values and principals are demonstrably preferred over the other candidate's by more of the population, thus giving pause to any declaration of a mandate by Trump or his Republican peers.

There is work to be done by the better angels of our society. The overwhelming spirit of openness and acceptance that has defined the United States on the world stage for much of its existence over the past 100 years or so will damn well never be snuffed out by the four year tenure of an uniformed and policy ignorant carnival barker. Yes, there might be some "white privileged so-called liberal middle class" members of our country that may think it quaint to attempt (more likely suggest) to move to Canada (I personally know of none), but there are plenty more of us liberal minded progressives who are more than happy to stay right here and continue to fight the forces of regression and repression, and win. Stay tuned...