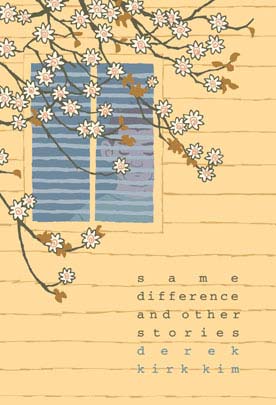 When I first interviewed him earlier this summer, Derek Kirk Kim had recently received two Eisner Award nominations. He would eventually win one for "Talent Deserving of Wider Recognition." This interview was originally conducted to coincide with Top Shelf's publication of Kim's SAME DIFFERENCE & OTHER STORIES. The book collects the best of Derek's webcomic, which are posted on his website, lowbright.com, and the mini-comics version of Same Difference. So here is Derek in Mr. Charlie #38:

Although I'm going to write a brief introduction for this interview, would you mind introducing yourself to readers - maybe a little biographical info and a little on your current comix works?

DKK: Sure. I've been serializing short stories infused with personal experiences at my site www.lowbright.com since the year 2000. I also released these stories in mini-comics form, and recently as a trade paperback.

Would you mind briefly introducing us to your book from Top Shelf, Same Difference and Other Stories?

DKK: It's a collection of short stories I wrote and drew from 2000 to 2003. It was originally self-published with the Xeric grant last year. Much to my glee, Top Shelf picked it up for the subsequent printings.

You received a 2004 Eisner nomination for "Best Short Story." What does the nomination mean to you both personally and creatively? Do you see it as some kind of incentive or validation of your work? What do you think it means to you professionally, in terms of how other creators and readers will regard your work from this point on? Or are the Eisners really not that important?

DKK: I would be a total liar if I didn't say I was thrilled. In the long run, I guess awards really don't mean anything, but if anything, it's a huge slap on the back and it really is encouraging. But if an artist is seeking validation from anyone but him or herself, I'd say he or she is barking up the wrong the tree. It shouldn't be a goal in of itself, but it certainly is a great push out the gate. It makes me want to do even better on the next project to prove to myself that I'm deserving of the attention.

In one interview you mentioned the possibility of illustrating children's books. What about that medium interests you, and do you see the work you're doing now as already being close to book illustration? 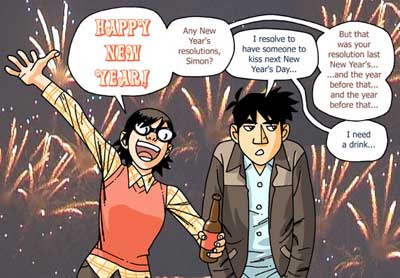 DKK: Well, I've always liked children's books for one thing. There's a power to its simplicity, and when it's done well, it can resonate just as strongly as any long form medium. Look at Oh, The Places You'll Go! or The Little Prince for example. And the fact that it has impact on a child -- when they are at such an impressionable age -- seems like a great responsibility. The fact that you can have a tiny say in how a person will develop carries a lot of weight with me. If you do it right, I imagine the rewards go far beyond the monetary. It also seems like a great challenge.

Of your work that I've seen, I find it hard to categorize, not that that's necessary. However, you're not superhero or exactly artsy. You seem nearer to being a mainstream cartoonist, as in the guys you'd find on an editorial page or on the newspaper comics page or in some glossy magazine. Do you see your future in comic books or are you looking to migrate to the pages of TIME, THE NEW YORKER, or the VILLAGE VOICE and other such true mainstream outlets?

DKK: I am interested in working through more mainstream venues, where my work could be accessed by your average person who might not normally pick up a comic book. But I think I'd rather go through the book publisher route rather than a magazine. Mainly because I do long form comics and it would be hard to find a place for my work in a magazine where real estate is so limited to individual stories or articles.

In another interview you commented that you hated drawing comics? I don't know if you were joking, but do you have a love/hate relationship with comics? And does the computer and the Internet help you to stay interested in this medium.

DKK: Yeah, actually, the drawing part is really torturous for me. It's tedious and nerve-wracking. But I realize it's something that's got to be done - and done well -- so I don't cut corners on it even though I don't find it enjoyable. And I don't know if the Internet helps me stay interested in the medium itself, but having my site with an update schedule motivates me to work everyday. (Well, when I had a update schedule anyway...)

I've never interview a Xeric winner before you. What was the submission process like for you, and how much did winning a grant help you be able to keep presenting your work to the public?

DKK: It was one of the best things that happened for me. I'm so grateful that I got it. Besides footing the bill on the printing of the book, it got me attention, which helped me get in with Top Shelf and work for other publishers.

Beyond the publication of Same Difference..., what can we expect to see by you in the coming months?

DKK: I have a lot of projects in the works with several publishers, but I'm afraid I can't disclose info about any of them at the moment. Well, the one project I can talk about is LOWBRIGHT, the ongoing series. It'll be a one-man anthology and among other things, it'll continue the story of Simon. I hope to launch this late, late this year or early next year. That probably means early next year knowing my glacial speed... 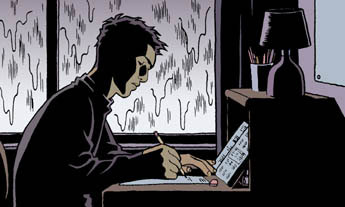 Before we go, I like to give the interview subject a chance to send some shout outs or pass along additional info to the readers. So have at it, if you will.

If you're a publisher or creator, contact me by hitting the clickable link. You can also read my movie reviews at www.negromancer.com. Holla!