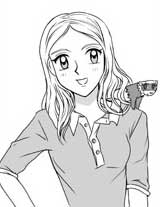 Mr. Charlie #24 proudly presents (drum roll it, babeeee) Lindsay Cibos, the Grand Prize Winner of the TOKYOPOP's second Rising Stars of Manga contest! Lindsay won the $2500 prize last year and an opportunity to pitch her concept to a group of editors at TOKYOPOP and turn it into an actual manga series. And as Valmont said, SUCCESS! TOKYOPOP announced earlier this year that they were indeed going to turn Lindsay's winning entry, "Peach Fuzz," into a full-fledged manga series, as Ms. Cibos signed a multi-volume book deal with them.

According to the introduction to her winning short as published in THE RISING STARS OF MANGA 2, Lindsay was born in Winter Park, Florida and currently lives in Altamonte, FL where she works as a freelance artist - at least until her time became full up producing PEACH FUZZ, the manga series.

Lindsay's partner Jared Hodges provided lovely screen toning for her story, the tale of a girl and her pet ferret. It's a lovely, fanciful story that portrays two very different points of view. Lindsay answered these questions back in November not long after I hatched the idea to Q&A the RSoM2 winners:

LINDSAY: The first experiences I can remember consciously seeking out comics would be in the early 90's when I was around 10. I suppose I read the kind of stuff that would appeal to young girls, the stuff that was easily available at grocery stores and bookstores. Titles like ALADDIN, GARGOYLES, SONIC THE HEDGEHOG, and the like. Basically, if the comic were linked to an animated movie or video game that I liked, I'd probably take some interest in it. I can't say that I started off looking at manga. There just wasn't too much of it around at first. Or at least anything that got my attention.

LINDSAY: I came across anime before manga. I've always been into animation more than comics. One day I was hanging out with my cousin and she was showing me a couple of videos she rented at her local video game store. I think the first thing I saw was VAMPIRE HUNTER D, which was a shocking change of pace from the Disney-ish types of works I was accustomed to. At first, anime seemed like a much darker and mature take on animation (of course I later found out that anime ran the whole spectrum of genres and stories, e.g. "Tenchi," "Sailor Moon," etc.). It offered more than the typical Saturday morning cartoon, which was more or less targeted at an age group I was growing out of. I was lucky to find out about anime when I did. It really captured my interest stylistically and content wise.

What was it about the form that attracted you to manga, and what were the particular titles and creators who appealed to you?

LINDSAY: Initially, I was interested in any manga I could get my hands on. Remember at the time there wasn't too much out there and it wasn't well marketed. I recall picking up primarily OH! MY GODDESS and RANMA. I found manga, over other comics attractive for several reasons. For one, primarily being an animation fan, there was that tie in. Second, it had more to offer in so far as stories -- the types of stories you just couldn't find in American comics. I wasn't looking for super heroic, male centric, fantasy fulfillment /escapism comics (I don't think most girls are). While many manga are made for a teen male audience, many aren't. Third, the artwork tended to be a lot more pleasing to the eye, with an appealing look that favored less grit and more simplicity. Finally, many American comics are forever on going series, with issue numbers easily running into 3 digits. Like it or not, it's a bit hard to want to jump into a series when it's already on issue 289.

When did you first become aware that there were U.S. based publishers of manga (like Eclipse, Dark Horse, TOKYOPOP, etc.) and what titles did you like?

LINDSAY: I was at the local mall comic book store picking up other titles, when I first remember seeing manga on the shelves. Mainly it was the more popular stuff, like Dark Horse with Oh! My Goddess, and Viz with Ranma, which incidentally became some of my favorite series at the time. Since there weren't too many titles available at the time, I eventually found people who could get me manga from Japan, like SAILOR MOON (which wasn't published at the time). If I could find an English translation on the blossoming Internet, I was set.

LINDSAY: At the time, I wanted just about anything I could get my hands on. I wasn't so selective or critical as a teenager. Titles like, MAI THE PSYCHIC GIRL, FIST OF THE NORTH STAR, APPLESEED, etc. didn't rank too highly on my list. While I'm sure many of these have interesting premises, in many cases I was put off by the artwork. In the case of [Masamune] Shirow [artist of Appleseed], things like guns, machinery, and techno-babble, (or blood and gore in Fist of the North Star) just didn't interest me.

LINDSAY: I've known about TOKYOPOP since they first released MixxZine on the market. I'm subscribed to the TOKYOPOP mailing list. I believe I first heard about the RSoM contest in one of their emails.

LINDSAY: Peach Fuzz is a story I've been thinking around for a while now. It's a comedy about a girl and her pet ferret, and all the misunderstandings that can arise between people and their pets. I thought it would work well as a story if I could just get it in front of the right audience. When it came to the RSOM contest I didn't stop and think, "What are they looking for? What type of story will they want to pick as the winner." My primary concern was just to make a good concise little story for the contest's 20-page limit. As for making it fit any preconceived notions of what manga is, that's not something I really think about. I've grown up reading manga, and likewise I think my artwork has grown along with my interest in the medium. When it comes down to it, I'm presenting my work in the only way I know how, and am comfortable with. I think trying to imitate a style just to win a contest would be a tremendous waste of time for any artist.

LINDSAY: As you put it in your question, manga, like novels, tend to cover the whole spectrum of storytelling without being fixed to any particular genre. So to answer, I create comics that capture the type of look, feel, and storytelling that I like. Some of the "manga-like" points that I feel my comic contains include an easily consumable story, art style, and panel layout. Peach Fuzz is supposed to be a page-turner that keeps you interested and smiling the whole way along. The information is presented in a brisk and easy to follow way.

Is it your goal or dream to be a cartoonist, and how are you working towards that goal in terms of educating yourself about the history, form, and content of comics.

LINDSAY: Yes, absolutely! I've always aspired to be a comic artist. I want to be a successful comic creator, doing things on my terms. Part of that is getting the big companies to take notice and fund my projects. The other side is all about generally improving the quality of the work and always pushing to do better.

LINDSAY: My background is primarily self-taught. My knowledge on the medium comes from reading comics, figuring out what elements in them that I like, and then figuring out how to practically apply this information to my own particular blend of storytelling. 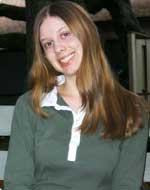 LINDSAY: When I sent off my submission, I put delivery confirmation on the package to be extra safe, and every time I checked to see if my comic had been received, I was told that no one had been there to accept the package and that it was sitting in the post office unclaimed. This was still the case a week after the deadline, so with much disappointment, I pretty much assumed that my entry never made it into TOKYOPOP's hands. I had almost completely forgotten about the RSOM contest by the time TOKYOPOP contacted me, so imagine my surprise when I got the big congratulatory phone call from them informing me that I was one of the finalists!

LINDSAY: Win or lose, I would have continued working towards getting my work published. The RSoM contest is just an opportunity worth taking part in. If anything, it serves to reinforce my beliefs that I have a quality idea for a comic that's worth being in print.

THANK YOU, Lindsay. Lindsay and her partner Jared Hodges share a website, www.jaredandlindsay.com, where you can see loads of art by the two artists and buy sketches and prints. As always, I want to holla at Mina Sung of PR/Marketing at TOKYOPOP for getting me the hook up.

Diamond Distributors and TOKYOPOP apparently recently signed a deal making Diamond the exclusive distributor of TOKYOPOP books to Direct Market comic shops. Part of the deal gives comic shops the potential to earn an even bigger discount on TOKYOPOP's book than prior to this new arrangement, so there's no excuse for your local shop not to be able to get you a copy of The Rising Stars of Manga 2, which is filled with very talented young and new manga ka, including Ms. Cibos.