The Aquaman Comics Offered at the Comic Book Bin 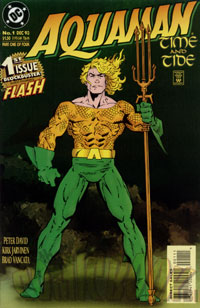 The Aquaman comics offered at the Comic Book Bin are the first issues of the Time and Tide mini series, the first issues of series after by Peter David and the first issue of the new series. In those stories, Aquaman reasserts his history, grows a beard, loses his hand to piranhas and is exiled from Atlantis. If you are a fan of the character this is a great way to build your Peter David collection for scratch for a very low price.

One of the most popular quick fix questions asked about the industry outside the "How do we get more people to read comic books" is the question "How can we make Aquaman a popular character again?" Unfortunately, this column will present no new information on that. It's too big a question that so many people have asked and tried to provide the answer to the question that it has hurt the character.

The current Aquaman series is going through a crisis again. The new team of Rick Veitch and Yvel Guichet who jumped started the series last year are replaced by DC Comic's editorial office very soon. Apparently, they, like many failed in their attempt to reboot Aquaman, again. Aquaman's many reboots have hurt the character as much as his exposure in the Super Friends in the 1970s and 1980s.

Few writers working on Aquaman have ever worked on the title without trying to reinvent him. I think that the next writer should stop trying to reinvent and work solidly with some established elements instead of adding another spin to the character.

About the success of previous series, the 1990s series was only cancelled to make way for Peter David's Time and Tide. It wasn't cancelled due to poor sales. Perhaps they should have continued the numbering, in hindsight.

Can one really blame anything on Aquaman for the cancellation of his 1970s series? I doubt so. Aquaman was a victim of a company wide crash.

Let me name some of the directions and misdirections in Aquaman's history, ignoring the out of continuity Golden Age character. 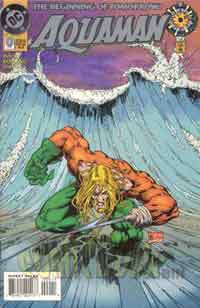 2-70s Jim Aparo Aquaman - one of the best. This series added rogues, a wife, a baby, and continued to move forward. It never looked back. I think that this Aquaman series would have been better at home at Marvel.

3-JLA Aquaman - that's the Aquaman we got after his series ended. Not much different but dealing with the events of his old series. He also reached new heights by taking over the Justice League.

4-Mid 1980s Blue Suit Aquaman - This series expanded the Atlantis mythos like none before. It also added magic. It went beyond again and added an emotional dimension to Aquaman. The blue suit was temporary from the beginning but refreshing.

5-There was a one shot Aquaman Special that continued in this direction but was really bad. It was nothing more than my brother I love you blah blah blah crappy art let me cry on your shoulder. Most people don't remember that one, and I don't blame them.

6-The Legend of Aquaman and the five part Giffen series from 1989, I believe. Giffen retold Aquaman's origin again. It had been retold in the mid 1980s series and in the 70s. He added the orange shirt prison theme. He consolidated some underworld societies - the militarist Atlanteans and added more melodrama with Mera - too much if you ask me. The art was by Curt Swan, which was weird, but nice.

This version of Aquaman lived only under the seas and did not get involved with the surface. It wasn't bad as it was action-based.

Atlantis Chronicle Aquaman - There wasn't much Aquaman in there, but Peter David consolidated and added a complete history to Atlantis. What Atlanteans were was finally defined. Many former themes were picked up again, like brother versus brother, and magic vs science. David gave Aquaman another origin.

This was my favourite Aquaman series. It's the only one that tried to make sense of everything that happened before while moving forward. Aquaman's powers were defined once and for all. His ties with the JLA and humanity were explained. It dealt with much of the problems from the past. I feel that the folks working on this series had the rug swept from under their feet in favour of Peter David.

I know few people agree with me, but I feel that this was an injustice. For once, someone was consolidating the character and doing something intelligent with him, instead of spinning new origins, new powers, new directions and before they could reap the results, they were shut down. This is one of the biggest mistake and wrong done to the character.

Peter reintroduced the Atlantis Chronicles' themes and took Aquaman in another direction. He cut off his hand and added more supporting characters, villains, and kids! Visually, Aquaman grew a beard and started to dress like Namor. I didn't like this series and its artists, but apparently, many did.

My main criticism is that David diluted and over used all of the great themes he had introduced in the Atlantis Chronicles. Before that, Aquaman had always been my favourite character. I lost interest in the character for the first time. 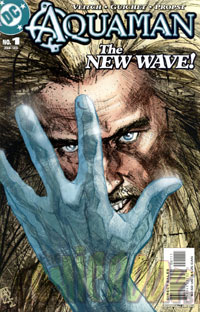 Following David's run were the Jurgens and Larsen stories. Compared with what had happened before, even if I didn't like Peter David's run, Aquaman reached new lows. Larsen is mostly responsible for this.

Rick Veitch Aquaman - In a way, some of the themes explored by Veitch were interesting, but again, he took the character in a far out direction and added the Arthurian stuff. I feel that this was a shallow gimmick that could not sustain itself. We can see the results of trying gimmicks on established characters. Visually, Aquaman changed for the better.

Finally, we're getting a new Aquaman with the orange shirt back. I don't know what it means to the character. Is he going retro like the rest of DC? What new direction -ahem, will he be given?