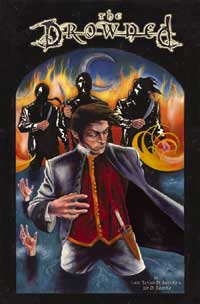 Set in 1800 The Drowned is the story of French mental patient Théophile who escapes from his prison cell with the help of inexplicable inner demons. As he arrives in his native town in the West coast region of Breton, facing England, he relives deadly events that may have contributed to making him a lunatic. Can he trust anyone in this superstitious little town?

The Drowned embraces a style rarely seen in American or European comics. If you're a fan of Goethe's Faust or Stendhal's The Red and the Black, you'll love this graphic novel. It's immersed in the Romantic literary genre that pervaded the first half of the 19th century. Taylor's story is covered under several layers of contexts, themes and secrets, while being very accessible.

The visuals, by husband Di Bartolo are as immersed in the Romantic tradition as the script. Everything is detailed, dynamic. Although the artwork is very realistic, characters move fluidly. One of Di Bartolo's strengths is the facial expression ne gives each of his characters. The range of emotions covered is impressive. He also likes capturing moments with various camera angles.