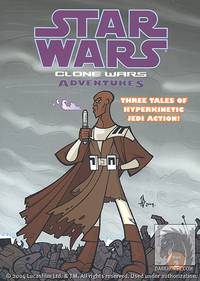 Dark Horse Comics took the hyper-kinetic action and angular drawing style of Cartoon Network’s “Star Wars: Clone Wars” series of cartoon shorts and turned that into the comic digest magazine, STAR WARS: CLONE WARS ADVENTURES. While the first issue was a stirring riff on the TV series, issue two is a bit clumsier and drier. To be honest, I don’t like the prequel characters as much as I like the original trilogy characters, so I cut SW:CWA only a little slack, not that it needs much.

Some of the drawing perspective in the first story, “Skywalkers,” an Obi-Wan and Annakin adventure, is way off. It’s not a good effort from the Fillbach Brothers, the art team that performed so well in the digest’s first issue, but they make up for it with the book’s closing tale, a Mace Windu adventure that radiates manga speed lines, without the actual lines. B