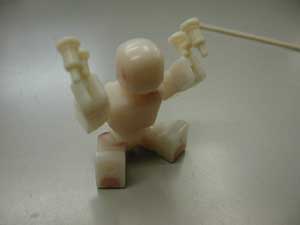 Shocker Toys is small but innovative toy maker based in New Jersey. Their major product, the Shockinis will soon be available.

Hervé:How much money did you start up Shocker Toys with - no need for exact figures, just something approximate.

Hervé:You started Shocker Toys in 1999. Has the market changed since then?

Yes when I was starting there were no products like there are now. But we were fortunate enough to break into the market in a timely fashion with our new block figures.

Hervé:Did you devote your entire time to the project, or did you keep your day time job while creating the company?

I kept a day job when I first started the company now the toys are a full time thing.

Hervé:How did relatives and friends react when you told them you were going in the toy business?

A lot of people were sceptic. Now when we say we sold another case of Shockinis they are in awe.

Hervé:Before your partners arrived, was raising capital something very difficult?

Yes, as I said a dollar and a dream. Lance and Joel my two partners have helped a lot as have I to make this company what it is today.

Hervé:Are the Shocker Toys your first product idea, are they the results of a normal evolution, or something you introduced to fill a specific need you perceived in the market very recently?

Shocker Toys is our company but if you mean shockinis they were not our first product. We started with a total new idea that has never been done and we are the only ones it was called the Shoulder Action Figure an action figure that could ride on kids' shoulders. It was based on a manga we had called Electrobytes where kids had robots that went around on their shoulders fighting one another. But that project has been put on hold as it was outsourced and snagged a few problems. The Shockini however was our first try at an in house design and went extremely well. We did prototype to production to selling online in 5 months. There is a craze of block figures now but we were toying with the notion of minis when we first started the Shoulder Action Figure project.

Hervé:Although they seem simple in design, I perceive that you guys spent a lot on research and development of the Shokinis. How long and how costly was the process?

It was a fun process it took 3 months for design and production. The cost was very cheap we happened to find a very good factory. As far as product testing everyone who has one in their hands loves them. Who wouldn't.

Hervé:It seems that the market is now riped for a line of customizable smaller action figures. We've got Kubricks, Pocket Heroes and a lot of similar toys - some customizable, some not. How do you perceive this specific niche?

There are only two customizable figures in the market now the Shockinis and the Stikfas. The other minis have licenses behind them and are just less articulated. We are actually still different from the other customizable figure because we are a preassembled figure not a model kit and we were conceived in the USA.

Hervé:A lot of people tend to look down on the smaller non G.I.Joe action figures. It seems like all the glory is in six inches and bigger these days. How do you hope to change people's opinions about smaller figures?

The 3 inch we have been told is great. It fits in vehicles well and is close to a g.i. joe. we are bigger then the minis and smaller then the big guys as some people say Just Rite We do plan on releasing a 6 inch further down the road.

Hervé:How was the reception to your company's product in the trade press so far?

The press has been great. We have been in a lot of website reviews and news such as www.action-figure.com and www.actionfigurecollectors.com and a lot of magazines such as Tomart's#121 and Lee's toy review#139 and Toyfare#83.

Hervé:In some of the information on your site, it states that you wanted to reach the 8 to 14 year old market. Are Shockinis really for this market, given the fact that collectors and customizers are probably more interested?

Kids that age like to do customs as well. Plus the shockinis come with stickers and cool accessories so you don't need to paint them to have fun. We even have people age 40 wanting to get some Shockinis.

Hervé:Shokinis seem to go against the trend where fans have to collect several different figures and built a collection. Here, potentially, you could own but one and be happy, unless you're a customizer or an army builder. What can you do to encourage collectors to purchase more figures?

You can buy theme packs to decorate your shockini. But you might want to have more then one with different themes.

Hervé:Will there be any female Shockinis, or even kids, skinnier and fatter figures? 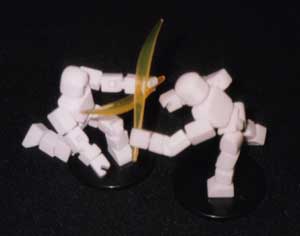 We have three body styles now the block the humanoid and the skeleton. In our robot form we have a female but with the way the block figures are and easy to customize they can easily be made into a female version.

Hervé:What are the strategies you've found for releasing an action figure line that's not backed with an existing license?

Just make something cool and promote it as much as you can. You have to remember you do not have the license to back you up.

Hervé:In the world of animation, and film, it seems that there is little place for original properties. I feel the same is happening in the toy world. Are license-based toys really necessary to survive in this market or is there still a place for projects originating solely from a toy line?

There is always toys that survive without license some of them become movies or cartoons like the old days where the toy came first then a cartoon. Now we are a small starter and license companies will not bother with us which is a shame because our mini figure has a lot to offer. So we push on and just make it as exciting as if it had a license really it has imagination behind it.

Hervé:The reverse also happens, where vendors use comics and cartoon series to push toy lines. Will that be part of your strategy?

Our strategy is good clean fun with a cool little action figure. If anything comes out of it such as movies which is being looked at or a cartoon or anything we will roll with it. But for now we are just letting a cool little fun toy hit the market. Also we like to listen to our fans we let them pick themes for the figures and such. A lot of the big companies never see their fans we encourage them to post at our forums http://forums.delphiforums.com/shockinis and we talk with them and listen.

Hervé:The world of toy has evolved and become mixed with the world of comics. Is there anyway for Shocker Toys to reach this other potential market?

Like I said we have a manga property actually we have 7 manga properties drawn by our artist Cameo. they might turn into something someday like a b/w manga magazine.

Hervé:What materials you suggest for customizers who want to paint and change their figures?

Hervé:I like the sturdyness of Shockinis. The plastic you guys used is very durable. How cost effective is the use of quality plastics?

The Shockinis are very durable. There could be a chance that if one was run over by a car it might break but as far as durable they pass the test. And still the plastic is easy enough to carve. Using a strong plastic is a little more expensive but it pleases the fans so "so be it"

Hervé:Did you use a CAD or 3D modeller to engineer the Shockinis or was it a hand model?

The Shockini was done totally by hand, Super Sculpty III then was made into molds with Smooth-On then a plastic versions which was held together with pins that was sent to the factory. They in turn made a 3-d model of the figure and used that to make the tools. And that's where we get the Shockini from we see today. Actually we have changed the Shockinis the new ones come with a sticker sheet (50 stickers) a white base 5 white accessories(gun, sword, staff, binoculars and a customizable block) And the figure which has had his arms and legs changed to allow for more movement. The hands on the Shockini interlock now as well like little wrestlers. 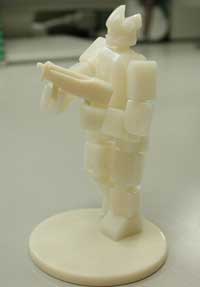 We do a bit of everything drafting sketches 3-d cad and sculpting.

No we packed every feature in we could think of and that was suggested. Like I said we even added stuff before the final product went out to market.

Hervé:Is the novelty gadget market a place where the Shockinis could prove popular? If you glue the base on your dashboard he can strike a pose while you drive. Actually we consider ourselves in all markets toys, games (we are working one something now), specialty and other doors for Shockinis to open.

Hervé:Tell me more about the stickers that come with the figures?

Hervé:Will there be props like cars and small houses?

There will be vehicles and playsets down the road.

There will be a humanoid body which is very round and a skeleton body.