Justice League Of America: Another Nail #1 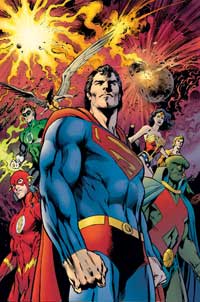 The original miniseries by Davis, "the Nail" was a concise, unpretentious, entertaining story of a world without Superman. It hardly needed a sequel which could diminish the prestige of the original. The first issue of this sequel does show signs of some padding. It begins with a tale of the confrontation between New Genesis, the Guardians of the Universe and Darkseid which seemingly has nothing to do with the main story. Davis also brings in a lot of minor characters and brings up some loose ends from the original mini-series. Die-hard fanboys may celebrate the inclusion of these other DC figures and the willingness to deal with unresolved issues. But it can also look like a rehashing of old concepts that really didn't need to be worked over. Still, his sub-plots are interesting, particularly his look at how the New Genesis-Apokolips war could be settled. The main story of a neophyte Superman who finds himself thrust into the limelight, is not as compelling as the dilemma in the first mini-series but it is entertaining in itself. Davis expertly depicts the differences and similarities between the mainstream Superman and this new guy who is being celebrated by the world but who is a relative rookie in superheroism. The art continues to be outstanding-- layouts, details and facial expressions-- all equal to the first mini-series, and that's saying a lot.