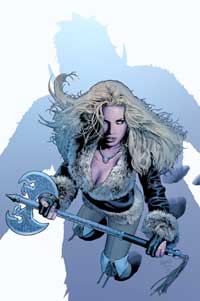 In the snowy wastes of Skarnhime, Arwyn, Gareth and Cassidy have stumbled upon an ancient, bloodthirsty evil that is preying on trolls. How will this affect their quest for Aydens arrow fragments?

In this issue Arwyn is given a bit of a wake up call. She has to look within herself at the hatred she holds so tightly within her heart and come to terms with the actual reasons behind it. The truth behind the berserker is finally revealed, but will this new knowledge be of any help in ending its bloody torment. And Arwyn isn't the only one who has to here things that cut deeply, as Bohr is subjected to Lady Khiva's seeds of thought, If they grow or not will have to be seen.

The Art Team has a great ability to bring flame to life and this is once again highlighted with the first few panels. Lands pencils are always a joy to view. He does however have faults. Arwyn's expressions sometimes don't always match up with what is going on. And the movement of the characters seems more akin to photo stills, rather than a flowing story. Where Land shines this issue however, is the flashback scenes, which are truly breathtaking.