Astronauts of The Future 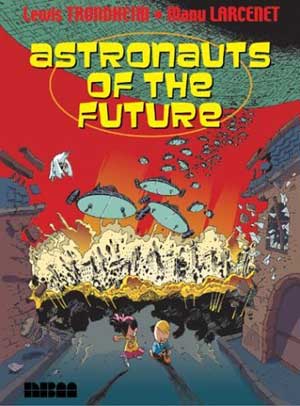 Don’t be fooled by Astronauts of The Future’s looks. This is not kid’s stuff. Well it is in a way, but both adults and kids will find this book fulfilling. This book borrows so much from the traditional Charleroi school from Europe that at first glance, you’ll swear that you’re reading Titeuf or Boule et Bill. In this story, Gil and Martina, kid geniuses think that everybody is really an alien or a robot.

I expected a book about quaint suburban kids with too much imagination. I was wrong. Even toward the end when one believes they have a good understanding of the story, Trondheim pulls in a few tricks. As anything written by Trondheim, there’s a calm voice and demeanor to the character, as if although their world is in crisis and they must react, there’s no need to rush.


Upon reflection, nothing but the style adopted by Larcenet would have worked for this story. This is a child’s world after all. Simultaneously similar qualities in the artwork enhance the irreverent and callousness of the script. Larcenet’s squiggly lines offer much texture to the story, even if often, his drawings’ shortcuts could use a little more detail to differentiate characters.