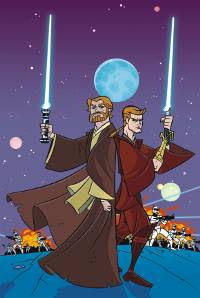 Like a lot of folks, I enjoyed the Cartoon Network's presentation of "Star Wars: Clone Wars," so I was quite excited to hear that Dark Horse Comics was going to publish digest-sized comic books based on the hit TV series. STAR WARS: CLONE WARS ADVENTURES, VOL. 1 is not a disappointment; in fact, it has been quite a long time since I've enjoyed reading a Star Wars comic as much as I did this one.

Haden Blackman's scripts completely capture the mood of the television series. His work is light and breezy, and the emphasis here will apparently be on action comics identical to the action-oriented show. That's fine; at this time, there is no point in delving into the characters, as readers already know the Star Wars cast, and Lucas hasn't attempted any intense character study since...

The art by Ben Caldwell and the Fillbach Brothers is a practical adaptation of the television series' style to comics, and it works. Caldwell and the Fillbachs' work, because they emphasis variation over copying, is simple and fluid, like manga art. They make this book an excellent choice for young Star Wars readers and old fan boys like myself. B+