Justice League Of America: Another Nail # 2 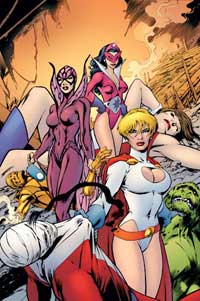 The second part of this miniseries, a sequel to the earlier story, "the Nail", reveals more of this alternate DC universe where Superman is the neophyte instead of the founding father. This tale gets away from the main storyline, focusing on a simmering conflict that is affecting numerous DC characters, ranging from the core JLA members to the Demon, the Spectre, Black Orchid, an alternate version of the Outsiders and the original Doom Patrol. It is a rather dense tale that risks confusing the reader who might be left wondering, "what the hell happened to Superman?" But Davis's brisk pacing and dyanamic art style makes up for this. He is still one of the best artists in comics now, one who doesn't let all the fine detail get in the way of good storytelling. While this new miniseries may not have the impact of the original tale, it is still an entertaining story, which is more than you can say for a lot of other books on the shelves now.