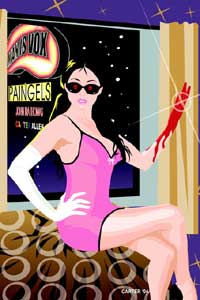 MAN IS VOX: PAINGELS is a continuation of Man is Vox: Barracudae, one of the first Candle Light Press original graphic novels. It doesn’t hurt not to have read Barracudae, but it doesn’t help much either. Paingels is less about standard comic book narratives (or what has come to pass for a standard narrative in mainstream comics publishing) and more about testing the limits of the graphic language that is comics.
Reading Paingels in one sitting can be a chore, but most people are tempted to read original graphic novels in one sitting, treating them as if they were short stories. Paingels, like much of Candle Light’s output, is a novel, in every sense of the world. In fact, there is little in North American comics that would match it in terms of density. Enjoy this in individual doses, savoring each chapter as an singular treat, which each one is.

Writer John Ira Thomas has taken comics narratives where David Cronenberg has taken film and where Philip K. Dick took prose fiction. His illustrative collaborator Carter Allen deserves much praise for his ability to match the diversity of Thomas’ narrative with a library of artistic style shifts that would even impress pop culture chameleons David Bowie and Madonna. So just in case you didn’t hear. Take the time to enjoy the clever and creative ways Thomas and Carter have presented each chapter, marveling at how the unique parts coalesce into a whole.
Besides, chapter five’s puppet theatre alone is worth the price of admission. Hopefully the puppets make a return appearance in Man is Vox 3. A-