Now, the surprise hit of the year is collected for the first time in one volume. If you missed the first series this is your chance to get the complete story.

When 17 year old Nara Kilday is tragically murdered, a conspiracy is uncovered that will forever alter the lives of 3 teenagers. This edition contains all four issues of the first mini series, along with lots of great extras. Get a behind the scenes look at the making of the series, with sketches, concept designs, and even a look at Josh Howard's original, never-before-seen self-published version.

Issue #1 of this series made the HOT 10 COMICS in WIZARD MAGAZINE Issue #150 April 2004 and the series has continued to receive grand reviews.

"Another surprise indie hit has been Viper Comics' Dead @ 17. #1 is officially sold out at Diamond and has garnered praise from both comics press If interest keeps up, this book could be the next 30 Days of Night." - WizardUniverse.com

"DEAD @17 is a little bit of horror genius." - SilverBulletComicBooks.com

"So..you want to hear the line that will make you want to buy this book? Undead school girl bisecting zombie skulls with an axe." - NeedCoffee.com

Dead@17, currently Viper Comics' only title, was arguably THE small press smash hit of 2003. Combining great horror with teen drama and a very simple and accessible, yet thrilling story, fans flocked to stores and comic cons to find out what the buzz was all about. - BrokenFrontier.com

Pre-order a copy of DEAD@17 TPB in the MARCH 2004 Diamond Previews, 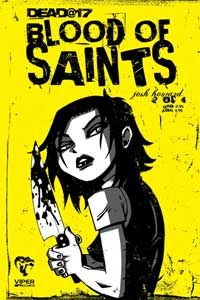 It's a tale of friendship, destiny, and betrayal set against the backdrop of the eternal conflict between Good and Evil.

When another teenage girl mysteriously returns from the dead, Nara's world is turned upside down. Desperate for answers, Nara decides to call upon Noel Raddemer....but he's nowhere to be found. Meanwhile, a voice from her past begins to haunt her, signaling the return of her greatest adversary.