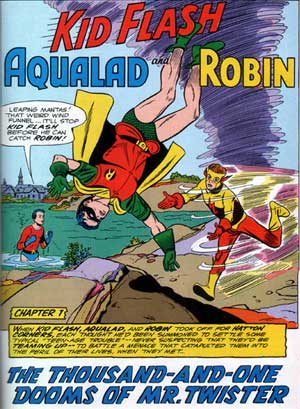 Bob Haney, one of DC’s mainstay writers in the Silver Age of comics, died on November 25 at age 78 of complications from a stroke at a hospital in El Cajon, CA. Haney is best remembered as the writer of THE TEEN TITANS, THE BRAVE AND THE BOLD, and other DC series in the 1950s and 1960s.

After receiving an M.A. from Columbia University in New York, Haney began his writing career in the late 1940s, working for publishers including Fawcett, Fox, Harvey, Hillman, Quality, Ziff-Davis, Dell, St. John and others. Through the Silver Age of comics he wrote numerous stories for ALL-AMERICAN MEN OF WAR and STAR SPANGLED WAR STORIES, as well as BRAVE AND BOLD team-ups, BLACKHAWK, TOMAHAWK, SUICIDE SQUAD, and stories of The Unknown Soldier, Green Arrow and many others. He contributed some of the earliest Sgt. Rock scripts to OUR ARMY AT WAR, and is credited as co-creator of Eclipso, Metamorpho, and the original Teen Titans. Haney retired to Baja Mexico in the mid-1980s.

“Bob was a gentleman of eclectic interests who brought his curiousity about the world to his stories,” says Paul Levitz, DC’s Publisher & President. “I grew up with his work on classic series like TEEN TITANS for which he wrote the first several years of stories, and had the pleasure of being his editor on many war and super-hero stories. Both experiences left me with great respect and fondness for Bob.”