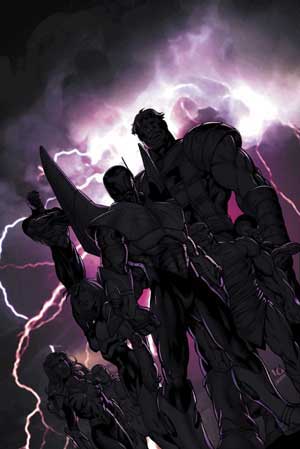 After the Devasting destruction of the original Avengers just what sort of threat to the world could persuade Captain America to assemble an all-new team? And after the events of AVENGERS DISASSEMBLED, who could possibly be on this team?

Avengers Finale was a good read, but after the terrible Chaos arc many Avengers fans were jaded. It looks like we (virtually) get the old Bendis back here though and that’s a good thing. Overall this is a really good set up issue. We find out that there is a conspiracy, but only see a bit of the plan. Our main players are already in the mix as well, so it all seems to be simmering nicely. Oh and the Peter, MJ, Hugh Grant thing was jokes :) There were a few flaws though. The whole Raft scenes were really bait, so the outcome was no surprise. It will be interesting to see if there will be an explanation for Sentry too.

Finch has done some real good work on this issue. The opening scenes are moody and make you wonder who the main cat is. The electrical scenes looked real good and the implications of the power resonated well to the reader. And the end scenes provided enough intrigue to carry the reader over to the next issue. The only things with this issue was that Matt Murdock looks more like Cyclops in his civies. Jessica Drew didn’t seem distinctive, just a generic women. And the villains seemed too passive after what had transpired. The cover is nice, but the New Avengers font face is horrible.