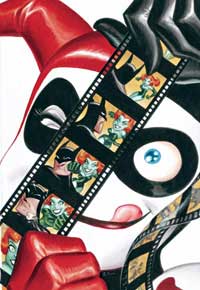 This revival of the old "Richard Dragon: Kung-Fu Fighter" is a kinetic, moody, title that offers much but seems to fall short of its promise. It is a revamping of the character, discarding some of the backstory from Richard Dragon's first book and his earlier appearances in the DC Universe. This Dragon is something of an angry, smart-mouth while the Bronze Tiger is now an elder, somewhat hipper mentor who needs the Dragon's help to take on a gang of martial artists called the "Circle of Six." These baddies have come to the troubled city of Bludhaven-- territory of the hero, Nightwing, setting the stage for a guest-starring role by the former Boy Wonder.. The Six make a great entrance, slaughtering a group of gangsters, but after that, they seemingly deteriorate into just another bunch of punching bag-villains, ready to be knocked down by Dragon, Tiger and Nightwing. While Dixon's story and McDaniel's art keep the story moving at the fast clip, they don't quite succeed in making the plot engrossing or even making the threat suitably menacing. One big weakness is the depiction of martial arts in the comic-- it just looks and sounds unconvincing. McDaniel has the heroes and villains leaping about to the point that it comes out looking rather haphazard rather than well-choreographed. Oh, and Penchak Silat and Monkey Kiung Fu are two totally different things.