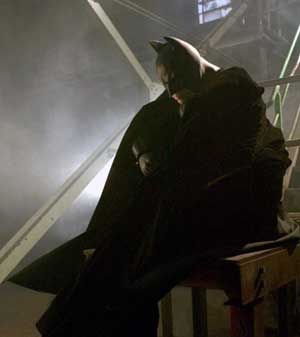 First page shows the world spinning in space.
Second page zooms down to the east coast of the United States.
Third page focuses on one city, dark and gloomy with a lot of gargoyles hanging from the buildings.
The succeeding pages travel through the entire city, the streets, the alleys, the skyscrapers, the slums. The Gotham police station is shown along with other notable landmarks.
Finally, the second to the last page goes to a mansion in the suburbs.
The last page explores the mansion till finally it reaches the bedroom of a pregnant Mrs. Wayne.
Last panel: "it's boy, Doctor Wayne."

The next four issues will show young Bruce Wayne in school, his warm relationship with his parents and the faithful butler, Alfred. We will get a one panel cameo by police cadet James Gordon. Issue four will end with Dr. Wayne telling his family, "why don't we see a movie tonight?"

The new generation of fanboys will probably eat this thing up, especially if it has the name "Bendis" attached to it. However, for the old-timers who are used to reading comics where Hawkman saves the Earth in the space of 12 pages, this type of thing would be unthinkable. But apparently there are people who will sit still for this. And they say young people today have no attention span!

This may sound like a rough generalization but didn't Marvel just spend an entire year retelling the origin of the JLA in the pages of "Supreme Power"? Gardner Fox would have polished this off in one panel saying, "and so the greatest heroes in the world come together to meet this new threat..." (with such dialogue as: "it's great that we can finally all meet." "Gosh, yes, I've long been an admirer of all of you.")

Amazingly, at a time when new comic titles are lucky to survive beyond 12 issues, we are seeing comics where an entire month is devoted to the protagonist talking to his girlfriend. Most of us have had relationships that didn't last that long. It is only a matter of time before we will see a superhero title get cancelled before the hero even makes his first appearance in costume. Imagine "Superman" getting the axe just before the rocket lands in Smallville. 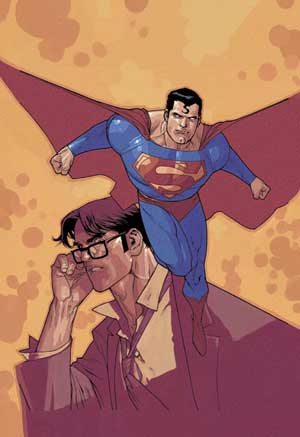 You would think that with all the time and panel-space devoted to such minor details, the writers could come up with something more informative. Something that actually moves the story along. Instead, we get paragraphs and paragraphs of lines like:

You can't tell if the characters are breaking off their relationship, arranging a second mortgage or plotting to destroy the world. Some writers defend this kind of dialogue, saying that real people actually talk like this. Yeah, but some of us graduated from high school. These kind of dramatic pauses and clipped phrases may make sense in a movie or play where you can actually hear the actors' voices, communicating all sorts of nuance and emotion. But in comics, all it says is "the letterer had a headache today."

Ironically, the fanboys that eat this kind of dialogue up are also fond of sneering at the old-school writers who still feel the need to spell everything out to the reader. Take this old-fashioned exchange for example:

SUPERMAN: I'll use my X-ray vision to search the factory complex for my arch-foe Lex Luthor! Great suns, all the buildings in the complex are lined with LEAD!
BATMAN: Lead! The one substance your X-ray vision can't penetrate. That criminal genius has found the perfect hiding place!

How obtuse, unrealistic and stiff. Here's how some hot new writer would do it. 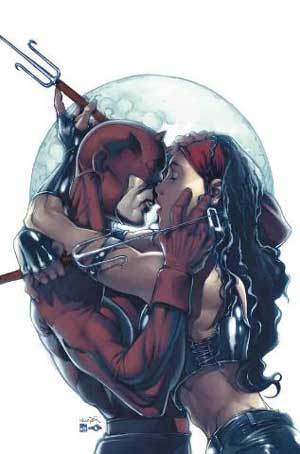 No wonder it now takes five issues for Spider-Man to beat the Green Goblin nowadays.

Perhaps we can all blame this on the changing market. Used to be comics were sold to kids, in drugstores and news-stands. There was no guarantee that the kid was going to get the second part of a continued story so you had to fill him in. Additionally, kids back then, didn't have the encyclopedic knowledge of superheroes that we all now possess so you had to spell out everything for them, tell them who the guy in the longjohns is, what his powers are, who his enemies are, what their powers are, what their social security numbers are, etc., etc., etc.

Today, comics are sold in specialty stores. The consumers know damn well when to show up to get the next chapter of the story... and if they don't, they can just wait for the trade paperback. All the readers know who these characters are. And if they don't, they are suppose to pick things up on the Internet... or maybe buy back issues. God forbid that the writer should have to tell them these details within the story! These writer-guys are all artists now, not some Trivial Pursuit contestants. Yes, yes, yes, there used to be this rule about how the writers should "treat each issue like it was somebody's first." But seriously, when was the last time anyone but a dedicated fanboy picked up a new comicbook?

Guess that partly explains how this decompressed story-telling works: the fanboys are willing to pick up issue after issue of "Daredevil" because they know the character and won't get lost even if it takes two years to explain who Matt's latest girlfriend is. With all the re-boots and "ultimatization" out there, many of the fans already know what is coming so they are willing to wait for something big. Hey gang, just eight issues before Ronnie Raymond returns. Just a year before "Ultimate Kang" shows up. Just six months before Monsieur Mallah and the Brain express their feelings for each other.... well, maybe not the last one.

This kind of writing can work. Heck, judging from the success of certain titles, it has worked. But I can't see it bringing new readers to comics. Despite all the changes in marketing and distribution, comics still come out only once a month and no matter how good the art is or how beloved the character is, sooner or later the reader is going to pick up an issue, read it in the space of 40 seconds and say, "Gee, now I gotta wait a whole month to see what happens next? What a gyp. I could get porn instead. At least that kind of thing can be read and enjoyed again and again (as long as you have enough privacy.)

Call me a reactionary but this ain't my cup of tea. It may be novel and innovative when used on occasion. It becomes a royal pain when you see it every week. At a time when comics cost more than a cheesesteak sandwich and are available only in some specialty store that you have to drive thirty miles to reach, I don't think I would be satisfied waiting a whole month just to see the hero complaining about his crappy car and dead-end job. I have my own crappy car and dead-end job, thank you. It's a good thing this comic store sells porn as well.