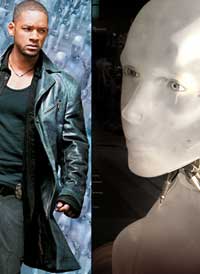 Set in 2035, I Robot is loosely based on Isaac Asimov's work. The creator of the term robot, he foresaw, the implications of mechanical domestics in our lives. In I, Robot, Spooner, played by Smith, is paranoid detective investigating the death of the inventor of all robots. He thinks a robot did the crime. The more he digs, he suspects the new NS-5 models are preparing a rebellion.

This is a good sci-fi thriller that didn't morph into a Will Smith movie. It's great to see that the actor is capable moving beyond the stereotype he created. This story offers lots of twists and action. The bad treatment robots receive in this film explain why they would rebel. Still, they overdo the emphasis on robots' safety. If no accident ever happens, why always mention how safe they are?

Whether they used animatronics or 3D characters, this film's designers provided a good depiction of the near future, although the new Chicago looked too plastic and too clean and not very probable. I wish they had spent more time on the visual designs of humans, providing realist displays of their clothing, instead of using product placement ads, like they did with Spooner.