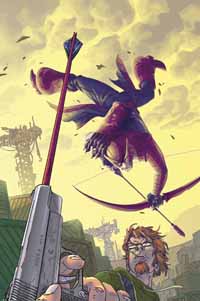 "Some hard-headed circus bowman is gonna take down a hundred archers?" Freshly donning his costume and charging into battle, Hawkeye replies: "No-but Hawkeye will!" In "The High, Hard Shaft: Part 6-Resurrection" by Fabian Nicieza and Stefano Raffaele, the HAWKEYE series' first story-arc reaches its exciting pinnacle, a thrill that's mostly due to Hawkeye's return to "classic Hawkeye" action.

What began as a gritty crime noir story-arc, ends as a superhero tribute to Indiana Jones-complete with exotic locations, non-stop action, religious fanatics, and sacred treasure. With cameos by the Avengers and a prolonged battle, this issue is a joy. Where it fails, slightly, is in the conclusion of the actual case. The big mystery is a little too big for its own good. Still, the story ends in a satisfying, light-hearted style as Hawkeye says good-bye to his Myrtle Beach hot-tub friends (warning them to "lay off the KFC").

The art impressively captures the tension at the temple battle, where readers are treated to an exciting archer vs. archer sequence. Here, Hawkeye flows through combat, almost effortlessly. A lot of detail is given to this battle-allowing Hawkeye to use his bow as a shield, something he has never before done. In fact, rarely has Hawkeye's archery been so effectively emphasized in its diversity, speed, and ability to defeat an entire army.