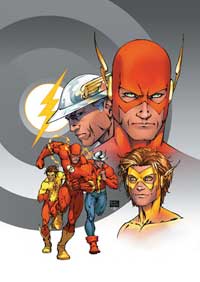 Hervé: It seems that 50% of comic book readers follow characters, while the other half follows creators. How does that work for you?

It's reality right now. But it's the same with everything. You're either attracted to the subject matter or the people who work on it or both. Everyone has their favourite characters, and of course they're going to follow them until the bitter end. There's a "floor" for a lot of books out there that are current movie franchises. It's breaking through the ceiling that's important - turning the characters we're working on into your favourite characters because the stories are good. Could we get more attention sticking to the A-list? Sure. But I like pushing other characters people aren't familiar with.

Hervé: Does it advantages you or does it hurt you?

In depends on the book. Some people will write-off JSA right away because "it's the old guys" (even though we only have three original members on the team - almost everyone else is brand new). So a book like JSA, we have to deliver a great story and we have to show you why you should care about these characters.

When I work on the second and third tier characters, my goal is to make them first tier in the minds of the reader.

Hervé: How do you feel about creator-owned projects?

They're great. Some of the best books on the market. Y The Last Man and Ex Machina are terrific, Powers, Wanted, Astro City, Queen and Country. Dozens of books I enjoy. Working on The Possessed was a lot of fun, to create something and not have anyone tell you what direction to take it or where to go.

Hervé: Do you have anything you created entirely in the works? 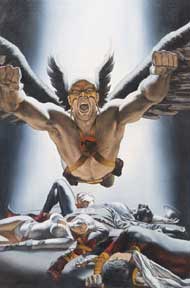 Hervé: Do you think the market can still support creator-owned/personality driven series?

Sure. Look at Y The Last Man, look at the trade sales on creator owned books across the board, look at Wanted. A lot of them outsell mainstream superhero trades in the direct market.

Hervé: How do you feel about signing exclusive contract with a publisher - (if you haven't done so yet!)?

It's what was right for me. I'm currently in the middle of my DC contract, time is flying, and it's been fantastic. DC has the most diverse line of comics on the stands, period. From Vertigo to Wildstorm to the DCU to Focus. They try new things all of the time, they publish a variety of books and they've treated me great over the years. It's all personal choice, and for me, there was no other choice.

Hervé: As I see your name mentioned in many places, it seems to me that you've finally "graduated" in the public's mind from another "upstart" writer into a "hot" writer. Would you agree with that?

I don't know. I feel fortunate to be where I am. I'm trying to improve my writing every issue, I'm trying to really push myself to find my weaknesses and turn them into strengths. I'd rather be called a "good" writer than a "hot" or "upstart" writer.

Hervé: You've been compared a lot to Mark Waid in the past - don't ask me why. Do you have an idea of why people associate the two of you? I mean why not compare you to Mike Grell, John Ostrander or even Neil Gaiman? 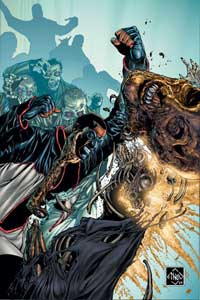 Because I write the Flash. J Really, I'm also from that kind of "I love super-heroes and am not going hide it." school that I think Mark founded. Mark has been one of my favourite writers for years.

Hervé: Who are your favourite writers?

I have so many to list I'll leave out too many I like. A few are Grant Morrison, John Ostrander and James Robinson.

Hervé: What's your writing process? How do you go about plotting an issue?

I have the storyline in my head, I sit down and break it down page by page, and then panel by panel.

Hervé: You've earned a good reputation for being very thorough and as a writer who researches his material. Is this part of some kind of professional ethics, or is it that fans are more demanding and critical than ever?

Personal preference. JSA will be around long after I'm gone. And it was around well before I was even born. We're adding to a part of the history of these characters when we work on mainstream books. We're trying to tap into something personal for us with these characters and hope that someone else gets that personal connection.

Look at Hawkman. I got to work on the book for two years with Rags Morales. Now Jimmy, Justin and Ryan are coming on. They're going to do their own take on Hawkman - great. I'm loving it so far. And I hope they make the book better than we ever did because I want Hawkman to be a successful character. I want this book to continue to grow.

If you're working on an in-continuity book you should be familiar with what's gone on before. It's that simple. 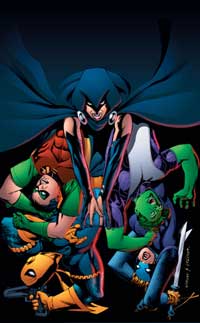 That doesn't mean you have to adhere to every specific detail or even some big ones if your story calls for something different, but like directing - you need to know the rules before you break them. In my film classes we'd have these guys who refused to learn the basics of storytelling with the camera and they'd say "art has no rules." Sure. They're partly right. But there are "suggestions" to better communicate with your audience.

Hervé: What are your influences outside of comics?

Everything. Films, books and the people I know.

Hervé: What kind of comic book fan/reader are you?

I love all kinds of comics. From Superman/Batman to Queen and Country.

Hervé: A lot of fans seem to have invested a lot power to you. It seems that they want you to "fix" any series that's having problems. How do you feel about that?

Hervé: How do you feel about padding stories for trade paperbacks and the reliance on story arcs?

Hervé: Do you see comics as a testing grounds for movies or as its own independent medium?

It's certainly turned into that. Marvel as much as DC as much as the independent route. Even Oni has its own "film development" department or something like that. When comics aren't making that much money on their own you can't blame anyone for looking for other sources of revenue.