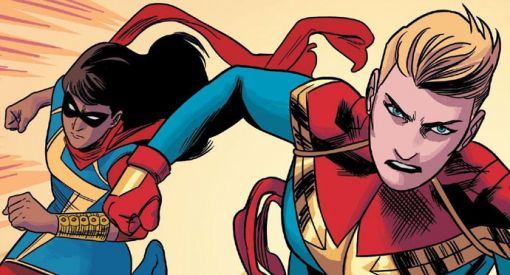 Generations is an event limited comic book series from Marvel Comics.  It is a planned 10-issue anthology, published weekly.  Each issue is written and drawn by a different creative team, and each issue will feature a different team-up of a classic Marvel superhero with his or her modern-day counterpart.  The series is meant to unite the legacy of classic Marvel Comics characters with the next generation of heroes as both move into the future of Marvel Comics storytelling.

Generations: Ms. Marvel & Ms. Marvel #1 (“The Marvels”) is set in a New York City of the recent past (likely sometime in the last quarter of the twentieth century.  The story opens in the office of “Woman Magazine,” part of J. Jonah Jameson's “Daily Bugle” publishing empire.  Editor-in-Chief Carol Danvers and her editorial and management staff are trying to deal with a crisis, and also with a new intern, Karina, who is really Kamala Kahn, brought here by a mysterious space-time force.

Kamala idolizes Carol Danvers, the original Ms. Marvel, but in this corner of time and space, Danvers does not know Kamala.  Also, “Woman Magazine” is in a state of crisis because of its circulation, but especially because Danvers and her staff are having trouble figuring out who is their audience and what do they want from the magazine.  However, the magazine may soon be under new management – alien management!  Nightscream of the alien Shi'ar Empire is masquerading as a human named Barbara Nelson.  Can Kamala save the magazine and also help the original Ms. Marvel stop and alien menace, even if the original does not want help from the new version?

Part of Generations: Ms. Marvel & Ms. Marvel #1's success is due to its story written by G. Willow Wilson.  Wilson is a truly unique storytelling voice in American superhero comic books.  She embraces the good, the bad, and the ugly in humanity.  She creates characters that capture the beauty and... un-pretty we can find in people.  In Kamala Khan/Ms. Marvel, she created a character who is a superhero that believes that she should first do no harm.  And yes, this is a one-off, throwaway story, but Wilson delivers a tale that epitomizes the resourcefulness and determination of Kamala.

The other part in delivering this winning tale is the work of artist Paolo Villanelli and colorist Ian Herring.  I like that they recall the work of Ms. Marvel's originating artist, Adrian Alphona, without lazily imitating him.  Villanelli and Herring create a bright, sunny, positive story that makes me wish this Generations tale had a second life.