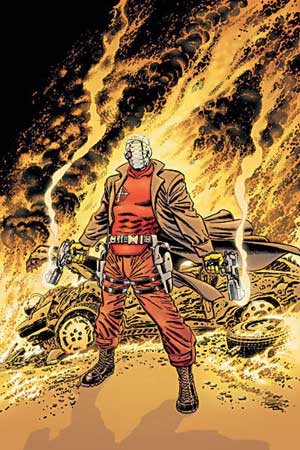 Deadshot, the hit-man from the BATMAN titles discovers he has a daughter he never knew about living in a crime-ridden slum called "the Triangle." The child's mother won't move out so Deadshot takes it upon himself to clean up the streets-- through gunfire. Gage gets Deadshot's fatalistic personality down perfectly, making him lethal enough to be intimidating, cool enough to be interesting but sympathetic enough to be engaging. The action is fast and furious with a minimum of chatty dialogue. The story has all the elements of a crime drama, western shoot-out and superhero adventure that Gage promised. The art by Cummings and Palmiotti however falls a little short. The layouts are good, the faces recognizable and distinct but many of the poses look stiff and posed, a detail that just sticks out in an action-filled tale like this one.