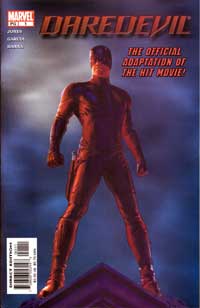 The comic book adaptation of the Daredevil movie is a nice preview of the upcoming film, but let's hope it kept the best part out. Marvel has released what it calls, THE OFFICIAL ADAPTATION OF THE HIT MOVIE a few weeks before the film becomes a success, or a failure. For hardcore fans, it's a safe way of gauging whether it will fly or not.


Something that comic book fans will notice is that nothing beats the real thing. Based on the few trailers available, one can assume that Daredevil will be the type of movie where sound is very important in the story, relating information to the audience and establishing mood. Unfortunately, this dimension is very difficult to grasp in the adaptation.

Letterer Dave Sharpe attempts to convey that information, but his efforts are not sufficient. Past Daredevil comic books were often successful in letting readers experience the character's perceptions. A few old tricks such as the outlines and sound effects captions are used in the adaptation, but for some reason, they are not enough. 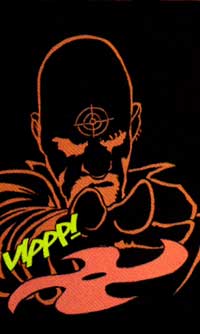 The creators behind this comic book are writer Bruce Jones, artists Manuel Garcia and Scott Hanna, and beautiful colouring by Chris Sotomayor. The entire team does an honourable job with the comic book, though it seems they only had an early script of the movie. There is no exposition. This is quite different from standard Daredevil comic books one can find on the stand!

Nevertheless, the brisk pace does not hurt the storytelling. In fact, all the key elements of the story are there and the readers are left to fill the void. While reading this, I was constantly hoping there would be more screen time, more stuff to see, more scenes with each characters. The comic book left me the impression that the movie would be a 44 minutes cop show.

Scenes in this comic book are uncluttered. There is no confusion about what is happening in the panels, even when the artists drew complex acrobatic shots. Using multiple instances of Daredevil, Elektra and Bullseye, in action scenes rather than speed lines, would have probably been cooler, but it wasn't absolutely necessary. The action was always clear.

The artwork in the comic book is very good. Each character has distinct facial looks, although they seem to match more the traditional look of the comic book characters' rather than the film's actors.

The story itself is well executed. Its starts directly in mid combat. Daredevil narrates everything that happened to him up to the stage we found him in the beginning of the film. This is a typical Hollywood framing device but it's quite new for cinematic super hero material. That's a good thing. 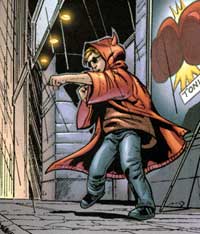 Another framing device is the use of the colour red. In the flashback scenes with young Matt Murdoch, he sports red shirts and coats everywhere. The only scene where he is without red clothes is the scene in the hospital. During that episode Matt perceptions changes. He begins to witnesses the world as shapes with red outlines.

The colour red in Daredevil seems to have two meanings. One the one hand, it is the colour of violence, symbolized in blood and the red roses that Kingpin asks his assassins to leave on their victims. It's also the colour of revenge and the Devil's advocate's symbol. It is the colour that first attracts a blind Matt Murdoch to Elektra, his love, mired in violence and blood. The colour red is a good foreshadowing tool.

Many traditional characters in the regular Daredevil universe were used. Some of them, like Karen Page, have no name in the comic book adaptation. Most character's quirks were also there. Foggy's crawling's wit and Ben Ulrich's trench coat and cigarettes were in. For some reason, I kept expecting Ulrich to guess Daredevil's identity, but that's because I'm such groupie for the Man Without Fear!

Classic themes like the Catholic Church as a refuge for Daredevil, newspaper clippings relating the ongoing fight between the hero and the Kingpin, roof tops, Murdoch's Irish heritage and abandoned dockyards are alluded to. An omission, possibly also in the film, is a scene showing Daredevil's helping a common man fighting bigger threats, although the script mention Matt's fondness for pro bono case.

Overall, the adaptation was short and took me about 30 minutes to read. Until the movie is available, this comic book will serve as a good appetizer. I'm hoping the movie will have more meat to the script, though this film and its comic book adaptation are very faithful textbooks on the Man Without Fear.