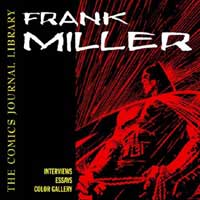 FRANK MILLER has given his best interviews to THE COMICS JOURNAL, the long-running magazine of serious comics criticism, discussion, and news. Five of those interviews are collected in THE COMICS JOURNAL LIBRARY VOL. 2: FRANK MILLER, an omnibus of Miller's opinions, feelings, and theories related to his work as a cartoonist from 1981 to the late 90's. This book also includes a sixth interview of Miller conducted by Fantagraphics co-honcho Gary Groth in early 2003 just for this book.

This volume also contains several sidebars, a wealth of examples of art by Miller and his collaborators. Anyone who wants a heaping helping of what goes on in Miller's mind when it comes to comics and its related politics and culture should immediately buy this. Of course, many people are put of by The Comics Journal's reputation for controversy, but in an "industry" where Superman's teenage creators grew up to become destitute old men and Batman's "co-creator" is more ignored than even Ralph Ellison's invisible narrator, TCJ's controversial aspects are actually quite attractive.

The interviews are thorough when it comes to Miller discussing his theories on storytelling and on how he puts pencil to paper. It would also have been nice if Miller had been less reticent about naming names when it came time to call out industry villains, hypocrites, hacks, and sell outs.

Still, the quality of the volume as a whole is just more proof of the good work of which Fantagraphics editor Milo George and Jon B. Cooke of THE COMIC BOOK ARTIST are capable. Here's to hopes that they have more in store. GRADE A