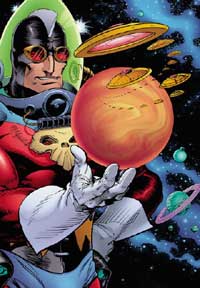 While relatively few DC and Marvel comic book characters have emerged from the so-called Modern Age of comics to have the same lasting and enduring popularity as many Golden and Silver Age comic book characters, quite a few Modern Age characters from independent publishers have impacted comics (and to a lesser extent, pop culture), either through their popularity and influence on other comics (Teenage Mutant Ninja Turtles) or by the fact that they are groundbreaking and revolutionary (Maggie & Hopey of LOVE AND ROCKETS).

One indy comics character has stayed on people's minds just by the audacity and sheer fun of its concept, Mr. Monster. The creation of cartoonist Michael T. Gilbert, Mr. Monster has appeared intermittently over the last two decades, busting caps in monster ass and kicking creatures around in comics published by a number of companies including Eclipse, Dark Horse Comics, Tundra, Caliber, and Image.

After a (too) long absence from comics, Mr. Monster returns in August to celebrate his 20th Anniversary when Atomeka Press publishes A1 SPECIAL: MR. MONSTER: WORLDS WAR TWO. The special is written by Gilbert with art and colors by George Freeman, a wrap around cover by Alex (LOBO) Horley, and a 1 in 4 variant cover by Dave Dorman who is a Stephen King collaborator and court painter of the House Stearn. The 48-page, prestige format, color book will have a $6.99 cover price. Mr. Gilbert reminded me recently that the A1 Special actually reprints the "Mr. Monster vs. the Nazis from Mars" story that appeared in the defunct PENTHOUSE MAX comic magazine, and this is a way for readers to enjoy the story without the sex comics with which Mr. Monster once shared space.

I conducted this interview early in 2003 when I'd planned on turning my movie review website Negromancer.com into a comics interview site. I've been putting off bringing this interview to the bin, but as it seems relevant again with the return of Doc Stearn…Mr. Monster, my very first interview of a comics creator becomes Mr. Charlie 34:

Are you still doing Disney comics? For whom and how does the American re-launch [At the time of this Q&A, Diamond Distributors had recently obtained the rights to publish comics based upon Disney characters and do so under the imprint Gemstone Comics, ed.] effect your future work on Disney characters?

MTG: I'm still doing Disney stories for Egmont, and have been for almost a decade. The only effect of the American re-launch will be the possibility of some of my stories being printed in America. Let's hope so!

What Disney characters do you like to write stories about?

MTG: My favorites are the duck characters, especially Donald. Who can't identify with that loveable screw-up? I also enjoy writing the sci-fi adventures of Gyro and Helper. What helps you to write stories involving Disney characters, especially knowing that the work must comedic, kid-friendly, and true to the "personalities" of the characters? Essentially, how do you do it? You certainly hit the nail on the head with story, "The Day Gladstone's Luck Ran Out."

MTG: Thank you! That was my first Donald story idea. It was written after I'd done those MICKEY MOUSE ADVENTURES stories, my first Disney stories. But I had come up with that "Gladstone" plot even before Disney Comics contacted me about writing for them, in 1989.

As for the "kid-friendly" stories, I grew up reading comics in the 50's, when the short comic book format was the norm. I love writing 6 to 12 page stories, and the Disney comics are one of the few places I can still do them.

The characters? They generally write themselves, as long as I stay true to their character. Carl Barks designed some extremely strong and memorable characters. Matter of fact, I find the ducks much easier to get a handle on than Mickey Mouse and crew because the mice didn't have the same guiding hand over the decades.

Is there any particular reason you write instead of draw or do both on Disney characters? If there is, what is the reason? 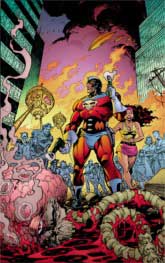 MTG: Well, actually, I do rough visual layouts, so there IS some drawing involved. But I simply don't have the interest or patience to stay "on-model." The artists need to stay consistent when they draw the Disney characters, and that's not my style. I prefer to stick to writing.

How did you get involved with doing a short for Marvel Double Shot?

MTG: I approached Marvel editor Tom Brevoort about the possibility of writing or drawing a feature for him.

Did Marvel chose the character you were going to do? If yes, why? Or did you chose Dr. Strange and why?

MTG: Originally I proposed doing a Ditko-esque Spider-Man story, but the movie was about to come out and everyone and their brother wanted to do a Spidey story. Tom asked me what other character I was interested in, and I picked Steve Ditko's other series, Dr. Strange. I've always been into the spooky stuff, so that seemed a natural!

MTG: I wanted to re-create the feel of the very early stories, but with a type of story that hadn't been done before. And I didn't recall Dr. Strange ever tangling with a Genie!

Were there any influences for the story, "The Bottle Imp," from comics or from outside comics?

MTG: A little of the " Arabian Nights," lots of Ditko -- and the Bottle Imp himself was inspired by the whimsical demons Bill Everett used to draw.

The story really played with the idea of optical illusions, sleights of hands, and misdirection. The reader, like Dr. Strange, has to pay attention to what he should see. In fact, some of the panels are shaped to give hints to the story's conclusion.

MTG: I don't know if you noticed it, but my theme of " misdirection" was also incorporated into the structure of the story itself. I set up the story on the splash page by telling the reader there was a surprise ending they should watch out for. As a result, the readers were looking for the secret of the Bottle Imp throughout the story -- which took their attention away from the second surprise (concerning Davy in the " present-day" sequence).

Do you think it is more important to tell a comic book story through pictures than words? Many comic books, especially of late, can be read with the drawings merely being illustrations that are hardly necessary to understanding the story. What process do you go through to make the reader pay attention to the pretty pictures if they want to understand the story? 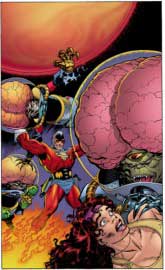 MTG: Comics have always been a visual medium. Ideally there should be a perfect balance between words and pictures. But if I had to choose in importance between words or pictures, I'd choose pictures. If you don't need the pictures to tell the story, why do it as a comic book story? Just write it in prose. In my own stories I try to reinforce the writing with the pictures and visa-versa.

Your work for Marvel and DC has been sporadic. Do you or don't you want to do more work for the Big Two and why?

MTG: My Disney work keeps me pretty busy, so I don't pursue it too aggressively. But if I get an idea that interests me, I do approach Marvel or DC. Sometimes they go for it, sometimes not.

My style isn't exactly mainstream, so that may be another factor concerning why you don't see more Michael T. Gilbert work for the "big two." But I am proud of what I have done -- and I'm one of very few creators who've been allowed to write, draw and color their own stories.

How did Mr. Monster's Comic Crypt become a feature in Alter Ego? How long do you plan to do it?

MTG: I accidentally discovered that the papers of the late Golden Age writer Gardner Fox were in the University Of Oregon's "Special Collections" department in Eugene, where I live. The Fox Collection included letters from fans ...some as early as the 1940s. Future Marvel (and ALTER EGO) writer/editor Roy Thomas wrote some of these letters back in the very early 60s, back when he was still a fan. I sent Roy copies and suggested I might like to use these for an article somewhere if it was OK with him. As it happened, Jon Cooke over at COMIC BOOK ARTIST had invited Roy to revive his old fanzine, Alter Ego as a section in CBA. Roy suggested I do my article for him, and that was my first "Mr. Monster's Comic Crypt" column. After that, I began doing it regularly. Alter Ego quickly spun off into it's own popular magazine, and to date I haven't missed an issue. I'll continue as long as I have spare time, and it continues to be fun.

What's your goal with this feature? Is it related in any way to the Mr. Monster Presents specials that Eclipse Comics published in the 80's?

MTG: Both projects were done because I love Golden Age comic art and their creators. I wanted to share some rare and wonderful items in my collection that may have been overlooked by modern readers. In the case of my MR. MONSTER SUPER-DUPER specials for Eclipse, I wanted to reprint some of the actual comics by my favorite artists and writers...including Jack Cole, Bob Powell and George Evans.

Is it a labor of love or do you feel that the feature plays an important part in telling the history of the medium or of a particular segment of the medium?

MTG: It's both a labor of love and my small effort to preserve some comic book history that might otherwise be lost. 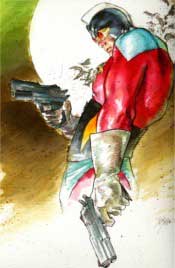 MTG: Both they and the great Will Eisner have been a tremendous influence on me. As a teenager, I adored Eisner's Spirit stories and EC comics like TALES FROM THE CRYPT and WEIRD SCIENCE. I've incorporated their "Film Noir" approach into my own comic book art and writing.

In a recent column, you spotlighted a young and very talented illustrator named Jim Keefe who is currently the artist of the FLASH GORDON Sunday comic strip (King Features cancelled the strip a few months after I did this interview). He toils almost in obscurity because of how adventure strips have fallen into disfavor with newspapers. Do you feel that someone should champion the dying breed of adventure strip illustrators and why? Are there more of these unknown talents Keefe that you would like to spotlight in Comic Crypt, naming some if you wish?

MTG: Unfortunately, I think the newspaper adventure strip format is largely a lost cause at this point. You can't really do an effective adventure strip if you don't have the room in the paper to print the art at a decent size, and no modern paper seems willing to spare the space. Adventure strips need to be large or you lose all impact. That's why some of the simpler humor strips have taken over the papers. And yes, there are many lesser-known talents that deserve mention. I've spotlighted some in the past, and hope to do more in the future.

THANK YOU, MICHAEL. You can find out more about the new Mr. Monster comic at www.atomekapress.com and www.comicbookresources.com/news/newsitem.cgi?id=3759 will take you to a mock interview between Mr. Monster and his creator Michael Gilbert at CBR. Mr. Gilbert also has a nice selection of his comics work and magazines featuring him and his character for sale; you can get an email list by emailing him at mrmonster00@yahoo.com.

Mr. Gilbert also told me that there is a new Mr. Monster six-pager in RON & JUSTINE FONTES PRESENT TALES OF THE TERMINAL DINER, which is available from www.sonicpublishing.com. He is working on another six-page monster kill fest for EVEN MORE FUND COMICS.

If you are a comics creator or publisher and you want to talk or have material for review, hit the clickable name link to contact me. Holla!