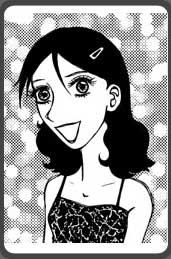 Welcome to the fifth installment of Mr. Charlie. Today's entry is the second in a series we're doing on the winners of TOKYOPOP's second RISING STARS OF MANGA contest. Thusly, we focus our attention on Elmsford, NY's Tania del Rio and her honorable mention winning, LOVESKETCH.

Could you describe the story and characters of your winning entry LOVESKETCH?

The main characters of LOVESKETCH are as follows:

Madison - She is the main character, a shy 17 year-old girl who attends an expeditionary learning high school where field trips and hands-on activities are part of the curriculum. She has a crush on a friend of hers named Andy, but he seems oblivious to her affections, and looks at her as just "one of the guys". The story centers around Madison as she and her class go on a river rafting trip in the rocky mountains and follows her emotions as she longs to grow even closer to Andy.

Andy- The object of Madison's affections. He sees her just as a friend, however, and is more interested in the sultry "bad-girl" of the class, Victoria.

Damien- Another guy friend of Madison's. Laid back and friendly, he seems to have a crush on a classmate named Lana although he may be attracted to Madison as well ( to which Madison is completely unaware.)

Renee- This is Madison's only friend who is a girl and she is the exact opposite of Madison: a party girl, outgoing and "girly" and a major flirt. She has a big crush on her friend Damien, although he seems less than interested in returning her affections.

The story, as I mentioned, centers around a rafting trip, where Madison and her friends get to know each other better through conversations around the fireplace and tackle challenging river rapids - as well as their teenage angst. By the end, Madison realizes Damien may be a nicer guy than she realized, thus opening the doors for more possible teen love triangles and high-school drama.

Would you mind telling us a little about yourself?

As for myself, I am 24 years old, recently graduated from the Minneapolis College of Art and Design as an animation major. The story in Lovesketch is very loosely based on my own experience of going to the Rocky Mountain School of Expeditionary Learning in Colorado, a K-12 school where the entire high school consisted of only 40 students. Currently, I live in New York with my boyfriend, Will Staehle, who is a book-cover designer for HarperCollins and my Welsh Corgi, Bailey. I work as a freelance animator and comic artist for various studios around New York. I love manga and hope to continue doing it in my spare time!

I've always loved comics ever since I was real young. I can't even remember the first one I read. When I was 4 or 5 I read comics based on my favorite 80's cartoons. Later on, I got into X-MEN with Jim Lee's re-launch, as well as other superhero comics. Around that time I was also reading ELFQUEST by Wendy and Richard Pini. I also got into NINJA HIGH SCHOOL by Ben Dunn which, although American, introduced me to the manga "look". Pretty much I read a wide range of things. The first real Japanese comic I got my hands on was a single issue of RANMA 1/2 by Rumiko Takahashi. I loved it and wanted more but, at the time, it was difficult to find manga anywhere.

I've loved anime and manga since I was very young and I actually got exposed to it through videogames which I had been playing since I was old enough to hold a controller. I knew most of my favorite games were made in Japan and this led to my early fascination of Japanese media. I loved the big-eyed, colorful-haired look of the character designs and the odd worlds that they inhabited. I wanted to get my hands on some manga and anime but, until I was about 14, it was tough to find any. When I was 9 years old I remember being jealous of my cousin in Mexico because they showed anime on TV over there, but not where I lived (which was England at the time). A couple years later I discovered "My Neighbor Totoro" on video, which I fell in love with right away. One of my local video stores began carrying anime - classic titles like AKIRA and PROJECT A-KO. Ever since I've been hooked, and ever since it's been easier to find anime and manga as well!

What was it about the form that attracted you to manga, and what were the particular titles and creators that appealed to you?

First and foremost, I just love the "look" of the typical manga or anime character. Especially the big, expressive, liquid eyes. The settings are always so fantastical and often bizarre with character-driven storylines which I appreciate (as opposed to the blander American superhero). I especially love Japanese humor - perhaps because I can't totally understand it! One of the first creators I became a fan of is Rumiko Takahashi. I especially enjoy the Ranma 1/2 series and MAISON IKKOKU. The fact that Ms. Takahashi was (and is) a successful female manga artist appealed to me (especially when I was younger) because there are few enough of those here in the states.

4. When did you first become aware that there were U.S. based publishers of manga (like Eclipse, Dark Horse, TOKYOPOP, etc.) and what titles did you like?

I knew that Viz published some singular issues of "Ranma 1/2" in the early nineties, but my local comic store rarely had it in stock (it only sold American comics). I also was aware of Mixx publishing some titles including SAILOR MOON. I bought anything I could get my hands on, but I found many of the translations clunky. As time went on, I was aware that more companies were publishing more manga, but it was never really available where I lived. When TOKYOPOP started publishing SMILE magazine I was thrilled to read a compilation of stories aimed at girls. Up until then, all the manga I was exposed to was about robots and epic battles (which I liked), but it was very refreshing to read shojo manga for a change. Ever since, it's been my favorite genre.

Having grown up around full color American comics, I used to be put-off by the fact that most manga was black and white. However, that's no longer an issue for me at all. Some of the cultural differences used to alarm me too when I was younger - especially the nudity and extreme violence. But, again, it no longer upsets me. In fact, I like that manga is aimed at an older audience as opposed to American comics which all feel more "kiddy" to me.

I bought the first THE RISING STARS OF MANGA book last year. At first I didn't realize it was a contest - originally, I had assumed it was a collection of independent professional work.

I had wanted to do a shojo comic for some time and I had ideas that I never brought to life, until I learned of this contest. The contest gave me the needed motivation to make my ideas a reality. I did practice drawing in a slightly different style than I'm used to. My style is more influenced by Disney and American comics (with a hint of anime). But for this contest, I really wanted to try drawing in more of a shojo style.

Even though I did "Lovesketch" to try my hand at making a shojo manga, I don't think it feels very "authentic" compared to a real Japanese shojo manga. However, I never expected it to. I've grown up around American comics and media and that has influenced my style whether I like it or not. I think this is why you can almost always pick out the American artist among a bunch of manga drawn by Japanese artists. When I did "Lovesketch", I acknowledged that I was paying an homage to the manga I enjoy reading, but I was content with the fact that despite trying to draw in a typical shojo style with layouts more akin to Japanese comics, it would still "feel" American.

Is it your goal or dream to be a cartoonist, and how are you working towards that goal in terms of educating yourself about the history, form, and content of comics?

My love of comics has always gone hand in hand with my primary goal of being a 2-D traditional animator. I majored in Animation in college, but took as many classes on comic books as possible. These classes included everything from technique: writing, layout, penciling, inking, to studying the history of comics and learning how comics can be used to tell a story effectively, as well as more in-depth studies on the mythological superhero character, and cyborgs. I feel Animation and comics are so connected that there is almost no distinction between them. They both create the illusion of movement, and are limitless in what kinds of stories they can tell. And even though I am currently working as a freelance animator, I will continue to pursue my love of making comics.

I was very excited! It was my first time attempting to create a manga-esque comic, and I knew I was up against some very tough competition. I could hardly believe that mine had made it to the final rounds!

I went to the Minneapolis College of Art and Design in Minnesota, where I received a BFA in Animation in May 2002. No minors were offered at my school but if they were, I would have certainly chosen comic book art (which was also offered as a major). I took many animation and comic book classes in the 4 years I studied there and was lucky enough to have teachers such as Peter Gross (former artist on BOOKS OF MAGIC and current artist on LUCIFER by DC Vertigo) as well as Gene Ha (TOP 10), Zander Cannon (REPLACEMENT GOD) and Barb Schultz (MICRONAUTS). 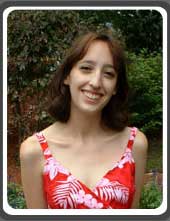 I do hope it might lead to more opportunities to create more comics. I think winning has given me some momentum to continue with the series on my own. I self-published a comic called "Realm Denizen" a couple years ago, and it might be something I'd like to try again with "Lovesketch". In the meantime, I will continue to pursue my goal of being an animator.

CLOSE DA DOH! I want to give a great big old thank you to Ms. Tania for answering a few more questions for me at the last minute. As usual, a sincere shout out has to go to Ms. Mina S. Sung, PR goddess at TOKYOPOP. Go to this link http://www.tokyopop.com/news/mangatalent/index.php for more info on these Rising Stars of Manga!