The Future of Gaming

But, in the interest of immersing myself in an unfamiliar culture, I accepted the challenge, at headed over to the Uniprix Stadium in Montreal to join an estimated 25,000 fans this weekend to see what the future of video games holds.

It turns out that’s its somewhat irrelevant what the future holds for gaming, because the present holds Guitar Hero III, which is all anyone wants to play. The layout of the festival, which seems to be modeled partly on a futuristic space station but mostly on a foggy Laser Tag battleground, includes approximately 7,000 Guitar Hero stations on various platforms. One area, the Videotron Propulsion Module, offers gamers the chance to dress up in their best rock star finery and send video of their performance to their friends over the Internet. Only one person I encountered was using that awesome Black Metal avatar that looks suspiciously like Demonaz Doom Occulta from Immortal wearing handmade Gwar costumes, and none seemed aware that they were playing Dance Dance Revolution for people in bad shape. 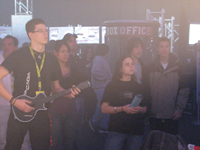 As well as Guitar Hero, Arcadia features plenty of games for all to play, including playable versions of the upcoming Assassin`s Creed, Super Mario Galaxy, and Resident Evil Wii: The Umbrella Chronicles. There are gaming tournaments, with purses up to $6,000, films played non-stop during opening ours, live bands in the evening, and the Canadian premiere of Machinima, a filmmaking technique that allows directors to combine computer-generated imagery with their favourite video game characters and turn playing Halo 3 for 48 straight hours into a creative endeavour.

Stay tuned to the Bin for updates on the Arcadia festival experience.