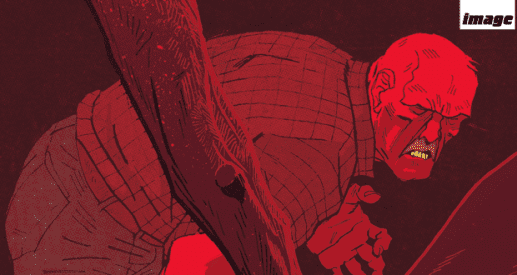 Earl Tubb has returned to his home in Craw County, Alabama and found it impossible to refrain from attempting to right the local wrongs perpetrated by the county's de facto ruler: Coach Boss. Coach Boss does what his title suggests, he coaches local high school football. He also does what his nickname suggests, he rides boss over the county like a tin pot despot. When Tubb finally physically confronts Boss though, things don't go as expected and we, as the readers, discover that Tubbs isn't necessarily the main focus of Jason Aaron's brilliant tale of the myriad of bastards, legal and otherwise, who roam the American Deep South...


Wow. Aaron and Latour have my vote for best final full page panel in any comic book published this year thus far. Not because it is particularly artistically or visually stunning (although Latour's art is brilliant throughout Southern Bastards), but because of the sheer "oh hell, I can't wait for next issue!" affect it has on the series' readers. Aaron is taking his pet project of a story in a direction that fits perfectly in with the theme of the work, but in a way that will most likely blow the doors off the upcoming action, violence, relevance, and message that Aaron looks to be extolling over the course of his series.

It would be a huge waste to spoil the direction Aaron is taking Southern Bastards as far as the story will be going (and just who will be the series' protagonist), so I highly recommend that you go out and get the first collected trade paperback on sale tomorrow (Oct 1st 2014). You won't be disappointed. Southern Bastards is shaping up to be THE must read of 2014...and beyond, and that's nothing less than we'd expect from the team of Aaron and Latour.