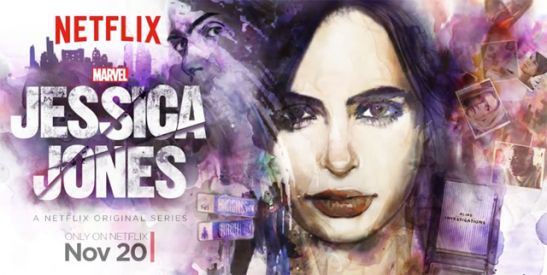 My initial reaction to Jessica Jones was to go and sit on a curb outside and not talk.

I saw it with a few thousand other people at NYCC, and after coming out of the extremely intense pilot, I was in a haze. Walking out the main doors and into the fray of hyper-reality, where Spider-Men and Deadpools and Kimmy Schmidts and whatever anime is popular right now walk by on a constant basis, it was way too much for me. I needed time to process, to think, and to feel out what I’d just seen.

This is because the pilot of Jessica Jones is, at its essence, about sexual violence. And the trauma that ensues.

For those of you who know Alias, the series that introduced Jessica Jones, you know what I’m talking about. For those of you who haven’t, I’m not going to try and explain. You will find out, and it won’t be pretty. And thank all of the gods that it isn’t.


In a single hour of Netflix television, I feel the Marvel universe has forced itself and any competition to actually consider what gritty realism means. It’s not the bullshit of the Dark Age, which is basically comics going through a particularly dark eye-makeup brand of adolescence. It’s actually thinking in adult terms. It’s dealing with material in a way that feels thought out and considers things from more angles than just sensationalism. And while superheroes are forever going to be sensational, we have long passed the point where we should feel the need to spill ink, digital or otherwise, about the comics growing up. We can all list comics that prove the superhero can be grown up. But superhero television? That’s a different story, and one Jessica Jones seems more than willing to tell.

Make no mistake, this is quality storytelling, but it’s also impatient in the best sort of way. Hand-holding, after all, is for children. The plot skips along in that first hour, covering a lot of world-building and material to set up its story. Looking back, the plot also gives the audience plenty to hold on to. Jessica herself stumbles intently along, but there’s a definitive feeling that a learning curve is taking place. So much more is going on than a typical MCU story and Jessica Jones wants the audiences to adjust, but also wants you to feel lost, uneasy, and like you’ve been kicked in the stomach.
Sure, there’s fingerprints of the bright and colourful MCU, but this isn't a show that laughs with you. Most of the time, it laughs at you. There’s quips, but they’re sad coming from Ritter’s mouth, who deftly wears Jones’ pain on her sleeve. This is humour to deflect, to incite, not to diffuse. It has a bite and, when Jessica isn’t using it to alienate people around her, those teeth are pointed towards the audience. People even swear, a little, and there’s even sex, but it’s pretty much the opposite of the “laid down by the fireside” sex. This isn’t making love. This is fucking, and it almost made me yell “finally” out loud. Here, we have our first example of Marvel actually thinking about what it means on the screen. It’s digging deep and the results, in that first hour, are fantastic.

But in the last third of the episode, the series went from a Daredevil mix of humour and darkness (albeit with a much different feel) to something different, and it will be the primary focus of many critics that I respect. This series will incite discussions, it will be evaluated on how it handles the tough questions and material it chooses to take on, and it will not be an easy series to watch. That may be the best sign that we can hope for with Jessica Jones. If this is the subject matter the brilliant, mostly female team wants to take on, then I hope it makes people uncomfortable. I hope that, after the first episode, more people end up outside searching for a breath of air before going further. It’s not something to be taken lightly, and they sure as hell don’t seem to compromise in that regard.

But me. I’m gonna need another minute.