They just don't make them like that anymore. If you've been collecting DCDirect action figures like I have for over a decade, you will surely appreciate this early gem from the vendor before they focused on more current comic book depictions for action figures. Dr. Fate was released in along with other mystics, mages, and magicians before there other Justice Society of America members. He came with Zatanna, the Spectre, and John Constantine. As a Golden Age character, Bruckner capture the simple and elegant look these characters had way back. he is not overtly muscular, just enough. 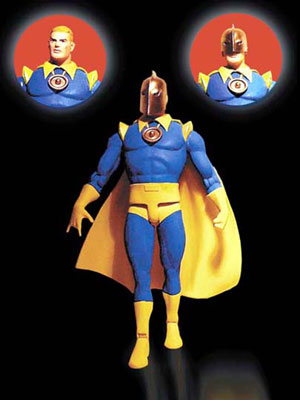 
His face is one hell of a fine sculpting effort. It's probably one of the best sculpted face in the entire DCDirect series.

He came with two helmets. A short one from when he became a more standard super hero and the long classic one. They are vac metal printed to mimic gold. They hold quite well on his head.

one serious problem with Doctor Fate was the weight of his chest and how his legs were so close to one another. That meant that he would fall constantly until I drilled a peg hole in his feet. I'm not sure how I would feel about that nowadays. These early action figures had no peg holes and every time they fell, other action figures also fell. Be careful with Fate's right hand. The fingers can break easily.

Although he has decent articulations, his knees cannot bend. If you find this action figure for under $100, shut your mouth, grab it and enjoy it. Sure it's not as articulated as recent DCDirect action figures, but it's the type of toy that will probably be never released ever again and they probably didn't make more than 10,000 copies. Collectors like me who know its value will not part with it. DCDirect also has not released a new Doctor Fate action figure since.