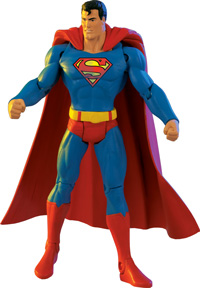 This looks like the generic Superman one can finds on diapers, blankets and underwear for kids. He's got a strong chest, wide shoulders and large arms, the spit curl and the large flowing cape. However, he doesn't look like something from the comic books. Superman does not look like current artists drawings but adheres to the his pop culture look.

The sculpt is not as good as the DC Direct's modern Superman or Mattel's Batman. The first flaw is the open mouth. Why is the mouth open? What's the point? The figure's forearms are too thin, compared with the biceps. His head is too small and the neck looks like it could support a larger head. The crotch area is not long enough. The anatomy is wrong. The biggest flaws are the long calves compared with the thighs.

The paint job on this figure is accurate, although the edges of the Shield, on Superman's chest are blurred. The feet lack paint in the joints. There are blemishes here and there.

The figure's scale, like mentioned above is perfect with other Mattel figures from the line. His head is so small that he can't even fit with the Silver Age Superman and Lois. Next to the modern age Superman, the discrepancy is too obvious. A head with the proper scale would have made this figure a winner. The only DC Direct figure that looks good next to him is the modern age Supergirl.

The figure will not fall, although Mattel's Batman is sturdier. Of note, Mattel knows how to make solid ankle articulations that don't disadvantage figures and make them useless, like DC Direct's. The figure's weight is spread over the entire figure avoiding making it top heavy figures like several DC Direct figures. Hold the modern and Mattel's Superman in each hand and you'll feel the difference. 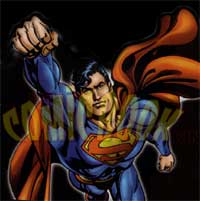 This figure has more articulations than the Batman figure. There are 14 points of articulations at the neck, the waist, the shoulders, the elbows, the wrists, the hips, the knees and the ankles. The articulations' points are not well masked. The left forearm has a weird bending range because of the way the sculpt. His arm can bend in the opposite way!

The plastic used on these figures is superior and more suitable for playing than DC Direct's. It's also thicker than Toy Biz and McFarlane's hollow plastics. It also shines more. This type of plastic resists better to warmer temperature than DC Direct's. The one drawback, is the loss of details. Why can Mattel produce cheaper products with this than other toy manufacturers? Is the plastic's quality better?

Other plastics were used. Batman's head, forearms and belt consist of rubber. Rubber allows Batman to grab objects without deforming his hand permanently. Superman's cape is a good compromise between hard plastics and the softer types. I used to prefer the soft types because they weighted less, which helps with stability. However, they are dust magnets. Superman's cape is lighter, but grabs less dirt.

My major gripe is the cape that comes with Batman. It's made of cloth. Granted cloth pollutes less, but it feels cheap and flimsy. At least, they could have picked a better fabric. This fabric is a real dust attractor. I'll probably have to replace it with a vinyl cape. The rubber used for the top of the cape would have been great.

The figures come in a huge box. Mattel gave Batman the top billing. Some comic book like illustrations are on the cover. I sure wonder why they had to twist Superman in the box. It's as if they were showing us his articulations. A Vanilla pose would have been enough. The back of the card has pictures of other products. However, Mattel missed the ball by listing their part numbers instead of their real names.

I know few fans who will remember these number. Little kids will also relate better to "Robin" rather than "B4980." I guess Mattel wants to make orders easy for retailers and distributors. If I were them, I would worry more about the end user's need rather than the retailers. The retailer will always try to get the right part number. It's his job. The customer is not as patient and it's not his job.

Diamond listed this set at $19 USD or $35 Canadian. Accept nothing higher than that. 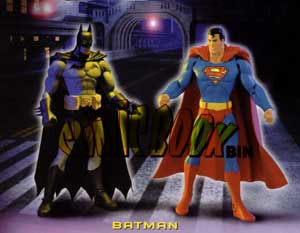 This set is widely available in comic book stores and related specialty outlets. I don't know if Mattel will offer it to regular retail stores. Nonetheless, be very careful when buying this set. There is much speculation around it. Retailers and scalpers have artificially decreased the availability of the Zipline Batman action figure. They are trying to do the same with this set so they can get more your money.

Retailers should not mark up a just released and make it hard to get. Any reasonable comic book store should have some. Avoid auction sites. They just make it harder for fans. Go to forums like the Comic Book Bin's and see if you can't trade figures with other collectors or get some tips about decent place to buy your action figures. You don't have to pay exaggerated fees supporting scalper's kid's college's fund.

Copyright © 2003.Use of material in this document—including reproduction, modification, distribution, electronic transmission or republication—without prior written permission is strictly prohibited.