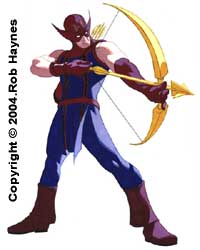 I was introduced to comic books at a very young age, where my memories are foggy. One impression is vivid, though--the thrill of reading Hawkeye in THE AVENGERS. The character became my very first crush and, in retrospect, ended up forming a lot of my attitudes and values.

Then, I grew up; and since reading comic books is considered inappropriate for preteen girls, I did what most "normal" girls do--became obsessed with musicians. I think, in a lot of ways, that I lost my individuality and imagination at that point. I went on to travel and developed an interest in archaeology. So, to help preserve the world's treasures, I decided to become a diplomat. I graduated from Stanford University with a Bachelor's Degree in Political Anthropology. But amidst all the studies of politics and economics, slowly my imagination resurfaced.

After Stanford, I began to travel again and to write fiction based on my travels. Soon, writing became my biggest passion. So, I returned to school to receive my Master's Degree in Creative Writing from Loyola Marymount University.

Then something strange happened. I was working part-time as an English professor and writing uninspired short stories and novels, when--after roughly fifteen years of completely forgetting him--I began to wonder what Hawkeye was up to. Odd. I did an Internet search. A website dedicated to the Thunderbolts popped up--and I was instantly a little girl again. Seeing that archer, smugly smiling in his purple costume, overwhelmed me with memories, fantasies, and ideals that I had long ignored. Immediately, I was re-hooked and have since been studying comic books as an art form--reading them, reviewing them, analyzing the industry.

Currently, I'm adapting my more traditional prose training towards comic book script writing, in the hopes of one day joining the industry. Something about comic books takes root in a child's heart and never wilts, not even after 15 years of neglect. I love the art form and would love to contribute to it--and, of course, write Hawkeye!