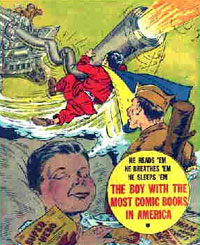 He reads 'em, breathes 'em and sleeps alone. Once he was the boy with the most comics in America. Now, he's the embittered old man with the biggest porn collection in America. It's Koppy McFad, strange vistor from another country with powers and abilities far below those of ordinary mortals. Koppy McFad, who disguised as an ill-mannered reporter for a great metropolitan news agency, fights a never-ending battle with fans, professionals and the rest of the comic industry. Follow his exploits, columns and reviews on this webpage and in police reports throughout the Pacific Rim. Tune in next week, same Kopp-time, same Kopp-channel.