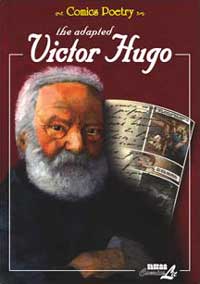 The Adapted Victor Hugo is the English translation of the French comic book adaptation of some of the 19th Century French poet and author originally published by Les éditions Petit à petit. Adapting poetry to comic books is always a challenge as artists are striving to imbue imagery to works meant to be self sufficient and read without visual aids. It's a challenge the various artist met.

A total of thirteen poems in all are translated into comic book format into various genres and style. The cartoonists where very creative in that they did not try to limit the imagery of the story to 19th Century France. Instead, some stories feature anthropomorphic animals, space ships and Algerian nomads. NBM translated some poems into English specifically for this book.

What one notices with the adaptation of poems is that the imagery can almost tell any type of story, depending on the artist, yet, the words of Victor Hugo, in these tales, remain as strong as ever. Included with each poem, are the text versions and some notes on Victor Hugo's life as reflected by the poem. It's a great book for those who want to study visual storytelling.