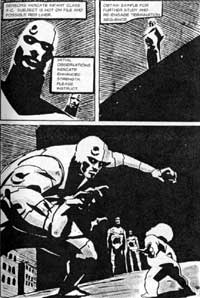 Very often, in the comic book industry, real talents slip trough the cracks. Creators, like Ted Seko who have a genuine voice and vision fail to find the public that they should have, because of many reasons, the first, of course, which is lack of publicity. Ted Seko's work was featured earlier in a short review. This time, he will get the real exposure his work deserves. Let's bring it on.

Ted Seko specializes in writing B movie-like comics. B movie is not used as an insult. It really describes what the comics are. The settings are simple. There is a large focus on narration and the character's personalities are all archetypes. In Seko's work, there's the large apelike hero, the young alpha male, the skinny damsel in distress, the tough gal, the bad guys, and Billy Cole.

Billy Cole is Seko's signature character. Although published in his own series over a decade ago, he has cameos in many of Seko's stories. Billy Cole is a baby with super strength created before Baby Cha Cha and all the other heroic babies we've seen in the 1990s. Billy Cole is always straight to the point. He's a no nonsense baby that saves the day.

The other frequent Seko archetype, the large apelike hero often starts as a monster or a reject from society and quickly becomes its protector while trying to save himself from a villain or some form of evil. This hero always has a flaw, whether it is his sexual appetite, alcohol, physical or mental impairment. His challenge is to overcome his plight, often with his own means. 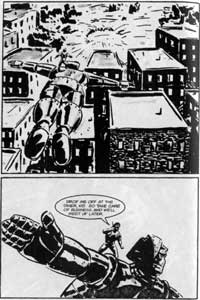 The young alpha male is always pure and heroic unlike the large guys. From the moment they step in the page, they are here to save the day. They share traits of young Manga male's archetype. Unlike the larger heroes, they are not disillusioned and they are often very naive, in that they really believe in their tasks. They often serve as beacons for the large heroes.

The skinny damsel in distress is rarer in Seko's work. Obviously, her function is to be saved by some hero and to serve as a love interest. The though gal, is by comparison more interesting. She's not the hero, but often functions as both mother-type and love interest for the larger hero. Her breasts or other parts of her body are often larger than life. She's a supporting character.

The villains are not as defined as the heroes. There are many types in Seko's book and that don't always reappear throughout his stories. Most of them are simple and resemble classic comic book villains. There are a few mad scientists, evil masterminds and many henchmen. Many use technology as a weapon to control society and the heroes.

This 96 pages mini-comic features Mighty Joe, a pennyless drunk addicted to hookers. Having lost his childhood inner world, he's recruited by a kid with his giant robot to fight the Baku, a mind controlling monster that creates zombies. During the process, Joe rekindles with his own childhood giant robot and tries to defeat the Baku and a more sinister menace. 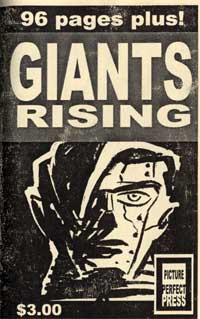 Seko's writing is straightforward. Though there's much introspection and monologues, it's nothing like Mark Waid's Flash or Bendis' Daredevil. The introspection does not stop the action. In fact, the story moves very fast. The narration or the dialogues never overpower the story. They simply enhance it. Many scenes are silent and rely only on Seko's great storytelling skills.

Seko's artwork is not for everyone. He uses a stark light and dark contrasts and heavy brush work. Nonetheless, Seko is a trained storyboard artist, and it shows. He always knows what shot to give to draw the reader in. Because all of his characters are archetypes, the heavy inking doesn't hide their identity. Included is smaller mini comics, True-face The Last Honest Man.

The Devil Has a Funny Laugh

This 64-page mini comic also includes another smaller 22-page book. In this story, a secret organization has taken over the world and herds humans like cattle. One loner, who found a mean of resisting control, is infatuated with a large breast woman and risk losing his anonymity just for the chance of having sex with the woman of his dreams.

This story shows more irony and double crossing than the Giants Rising. In fact, both this story and the one in the smaller mini comics, "My Muse" show the everyday man being manipulated by forces larger than him. All he can rely on is his brutish strength, but even that is not enough to fight against the cunning mind of the powers that be. Only Billy Cole can tip the balance. 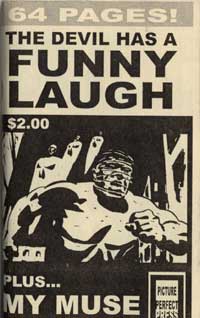 This story being an allegory for the current situation of man in society, the art is murkier and less decipherable than in Giants Rising. The storytelling more difficult to understand. There's a greater variety of style and experiments in the artwork. One large breast woman has a Manga character's face. There seems to be some charcoal illustrations and technical pen inking.

Ted Seko's work is in black and white. Frankly colour wouldn't fit them, only if they were simple. Seko seems to be very prolific which is rare in this industry. His work doesn't look like anything else on the stands and can't even be dumped in the other mini comics and autobiographical type of comics we've seen for years. However, Seko's work is always well plotted and entertaining.