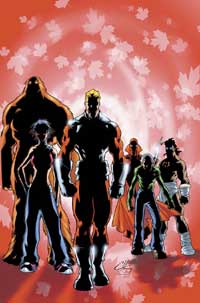 I picked up Alpha Flight #1 with the firm intention of not returning next month. Scott Lobdell, one of the former writers of the previous run returns here with a funny version of Canada's best known super hero team. Compared with Formerly Known as the Justice League, the humour is flat and forced. The team is composed of newbies, except Nemesis and Sasquatch. But I'll be back!

Lobdell tries to be light and infuse Canadian jokes and context to the story. Sasquatch is trying to recruit a new team of Alphans using script messages. The team is as diverse as Canada's population. Even can't if Lobdell can't write a funny piece, even if his life depended on it, he can write interesting characters. On that basis alone, I decided to check Alpha Flight next month.

Clayton Henry's work is good, but would look much better if his men didn't all look like overgrown apes. They all have thick harms and hands hanging lower than their knees. A little bit of anatomy would improve his work, considering his females look good. The colouring doesn't work for this book. It's very bright and doesn't fit Henry's work. Hopefully, the entire team will get better.