The Hawkman and Hawkgirl Set 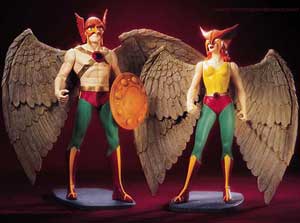 The DCDirect Hawkgirl and Hawkman action figure set, one of the first two packs ever released by the company, set the tone the standard for two packs to come. It is a beautiful set reuniting the premiere crime fighting couple from DC's universe. This set is also special because it was the first time a Hawkgirl action figure was available. As a proud owner of the Super Powers Hawkman, this set finally filled a void.

DCDirect's Tim Bruckner based the figures' design on the Silver Age version of the characters. However, since the Silver Age designs were very similar to the standardized Golden Age ones, the figures work for both. DCDirect even gave fans two set of helmets for each period. Both figures look very much like the Murphy Anderson Hawkman comics from the 1960s. There is hardly anything to complain about here.

These figures' sculpts make them unique and so endearing. Hawkman stands proud almost ready for a fight, carrying a mace in one hand and a shield in the other hand. Mimicking a flying pose with Hawkman is difficult. DCDirect did not design the figure for areal displays. Hawkman leans on his right leg while the left one is thrust forward. Because of the way the sculptor designed his wings, his back is hunches. 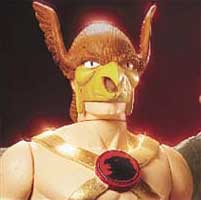 Hawkman's paint job is spotless. When comparing the paint job with those of the 2003 JLA figures, one would never think they come from the same company. There are colour highlights on Hawkman's helmet, blue highlights in his black hair, and grey overtones in each feathers of the wings. His skin and costume are plain. Surprisingly, the gold coloured belt and harness are still bright, after three years and a half.

Hawkman's scale matches perfectly with those of the JSA figures. Hawkman is smaller than the Hard Travelling Heroes Green Lantern and Green Arrow that DCDirect released just before him. However, he will fit very well with the Silver Age versions of Superman, Batman, the Flash, Wonder Woman, Aquaman and Metamorpho. Next to the Silver Age Green Lantern, Hawkman looks too small. 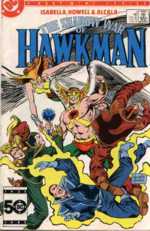 Stability is a problem. DCDirect advertised a stand but the set shipped without it. Use Hawkman's wings to balance him although it's not an easy and there are drawbacks. The wings don't stand well on smooth surfaces. The figure is top-heavy because of the wings. Using the wings to support the figure causes them to bend after a few weeks. Putting the figure's arms and gear in an action pose complicates everything.