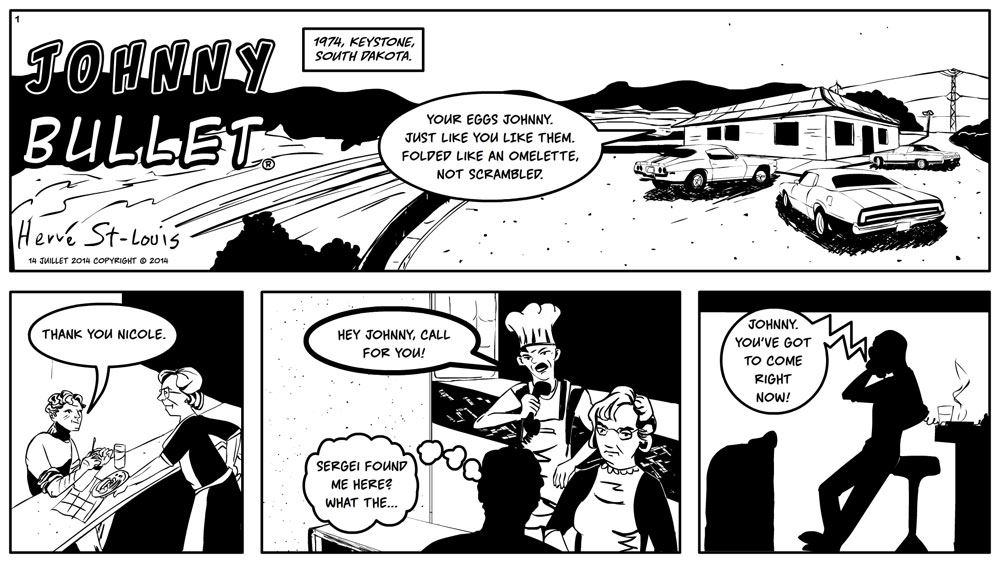 
Hi and thanks for waiting so long for me to finally release Johnny Bullet officially to the world. If you read French, you'll notice that this page was drawn a while back. The comic strip is evolving quickly and I hope you'll enjoy seeing it maturing the same way I do.

Who is Johnny Bullet? I'll let the strip speaks for itself. In a few weeks, I hope that it will be rather clear what the strip and its hero are about.

I'm crafting this Web comic as a way to release some stress from my doctoral studies and also create new material for my portfolio. I lost all of my animation and old comic book drawings in a flood in 2013. I don't have the documentation to reprise some of the old projects that I had. That's where Johnny Bullet comes in. What I'm doing on Johnny Bullet is new work. It's also a new idea without any old strings.

For years, I published ComicBookBin and never wanted to cross the line of making my own comics. Having lost most my old material, I realized that the ethical guidelines I gave myself did not matter much. Life is short. I like comics. I use to draw comics every day before I started writing about them.

I don't think Johnny Bullet will be the most complicated and layered work in my life, but I it will be the kind I'm interested in today. I care a lot about this strip although I don't know where it will lead. Some of my friends who have looked at some of the pages have already begun interpreting elements from the strip and seeing things I had not consciously planned that add to the comic. What one friend has told me is that Johnny Bullet is the kind of work a mature creator sure of himself produces. Thus, even if I don't try to make the story complicated, the storytelling reflects a life of experience.

It's only the first strip. But I hope that you will come back next week. Along with fellow ComicBookBin writer Leroy Douresseau, Johnny Bullet will appear every Sunday as part of what we call Sunday Comics at ComicBookBin. I'd be thrilled if more of you were to contribute to Sunday Comics with your own original Web comic.

A big challenge for me will be to keep up with the strip every week. Doctoral studies and bad time management tend to get in the way!

Thank you for reading this. If you like this strip, tell your friends. Also write to us and leave your comments below. Let us know how you feel about Johnny Bullet. This is the first strip. I can guarantee you that it gets better. Stay tuned.