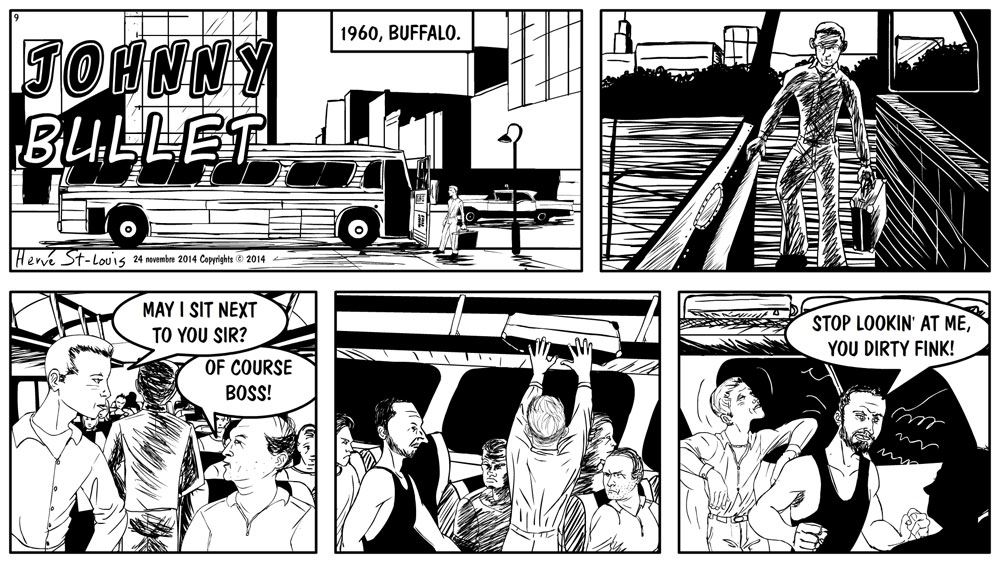 
I’ve been slowly discovering the world of Web comics again. When I first started Johnny Bullet, I decided to publish it at ComicBookBin. It makes sense of course but at the same time, with more comic book sites appearing everyday, Johnny Bullet is not widely known to all yet. I have to admit that I much prefer starting Johnny Bullet on a site that has traffic and a decent reputation dating back to 2002. But if you are a new Web comic creator where do you go? Well, you could do what I did. I added the first eight pages of Johnny Bullet to popular Web comics portals like SmackJeeves.com, The Duck Web Comics, and Comic Fury. I also listed it under Comic Rocket, a social aggregator for Web comics. These sites have tons of Web comics listed there already. I want people to read Johnny Bullet. So why not?

One thing I did to preserve the primacy of ComicBookBin is offer the largest view here. If you try to read Johnny Bullet elsewhere, the page will be smaller. I also only put the first eight strips that thematically are the first salvo in the comic strip. Anyone who wants to read more than that will have to come here. I’m not sure that I want to maintain the strip over so many sites regularly. I programmed the Web comic architecture and backend for ComicBookBin.  It’s decent enough. I’m still trying to figure out how to let readers view the latest page of a strip. I’ll get there!

The other sites are great and it seems that they are bursting with thousands of Web comics. They seem very different than what one sees in comic book stores. I like the diversity and the voices that we can see online. There are more female creators too. It seems that Web comics offer a place where creators can take more risks with topics and get out of the super hero/popular entertainment franchise that has captured the market. In fact, there is not the same amount of standard super hero and action material online. It’s as if the readership was almost different or already segregated their reading materials based on place.

Although a typical action adventure comic strip, Johnny Bullet doesn’t quite seem like standard print comic book material – at least not without a serious marketing campaign to make the comic acceptable to comic book store readers. I would argue that readers who purchase digital comics on their mobile devices often are the same print comic book readers that show less interest in Web comics. ComicBookBin being more associated with printed comics and the digital ones exported for tablets and  mobile apps see would thus be a less obvious place to feature Johnny Bullet. But since I created ComicBookBin, I can do whatever I want with the site. I’ll have to address the marketing segmentation issues another time when I can actually think more about the site’s strategy. Right now, I really can’t focus on that, which explains the few updates the last week. Alright, it was also Christmas.

Having said this, I’m publishing Johnny Bullet a day earlier today. It’s the holidays! I’ll be short on time tomorrow! Next week’s entry will be the first of the New Year, so I guess I should wish you all today an happy new year! Thank you for reading Johnny Bullet.