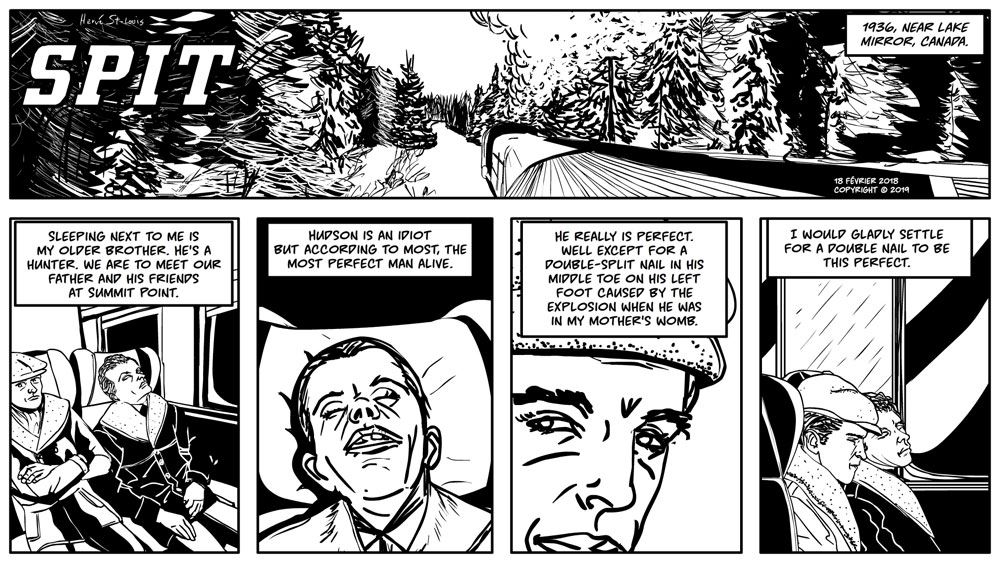 
This is Spit. It's my new comic. It's a different story again that bucks the trend of what people do in comics. Just to assuage your fears, just like Johnny Bullet, there are no vampires, no aliens, no super heroes, no mystical elements (at least for now), no talking animals (well I may change that too later). I'm creating a human story.

I hope that although this is not a genre-like comic that you will follow along. Just like Johnny Bullet, I will attempt to post one page per week. I was supposed to work on The German Cousin comic but it wasn't getting out of my system. This one, much like Johnny Bullet came to me as a concept easily during the holidays. I started working on it right away.

It still took me over a month to complete the first page. I've lost my speed and thrust from when I was drawing Johnny Bullet weekly, religiously. There has been many changes in my life - positive of course, so I'm still adjusting and working a bit more than before. Life as a new university professor overwhelms your senses. That's all I have been able to think about and had to make a great effort to work on Spit.

Spit is another one of those stories that I just want to tell and will selfishly create for myself. It draws from much of the modern literature that invaded my teenaged years and young adulthood. Superficially, I've thought about it a bit more than Johnny Bullet but I don't even know what will happen exactly in strip #10, let alone strip #3.