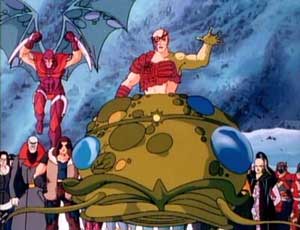 Cobra-la is the fantastic 40,000 years old secret snake man civilization created for the G.I.Joe 1987 movie. The movie revealed that Cobra-la was the organization who had sent Cobra Commander into the real world to conquer it. Unfortunately for Cobra-la and its better-known citizens, Golobulus, Pythona and Nemesis Enforcer, many fans would love to ignore that part of G.I. Joe's cartoon venture completely.

When a television series becomes a film, it's natural to expect the stakes to be higher. G.I. Joe the film didn't escape this convention. Unlike the series, we got to see older characters such as the old Cobra troops and officers, Stalker, Airborne and Footloose. We even got to see old vehicles such as the cool Tiger Cat and the Cora Hiss tanks. It's always a treat to see discontinued toys.

However, the nostalgia that made many revisit the G.I. Joe movie has its limit. Although an army concept, G.I. Joe and their arch enemy, Cobra have always been more like a science fiction show than a military one. From the beginning there have been incredible weapons of destruction, laser guns, characters with powers, monsters and no real casualties, as everyone had the uncanny ability to dodge bullets. 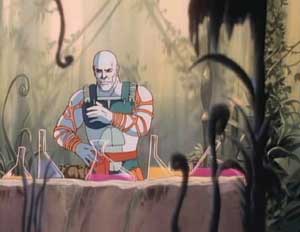 Cobra-la pushed everything further by creating a new side to the Cobra origin and a set of mythical creatures using bio-engineered weapons as technology. Although back then, it really felt like science fiction, the bio-engineered giant cornfields in the G.I. Joe movie look more real than ever. We may not have spores that can turn human into clams - yet, but we can mix a clam's genes with corn!

Back then, kids weren't very critical. They just absorbed what cartoon writers and toy makers gave them. Simply having the chance to see a G.I. Joe story on such a bigger scale was enough to consume all our criticisms. When watching the movie today, one can't begin to wonder at the incredible amount of plot holes and ridiculous situations.

For example, why have the stupid Dreadnocks seal Cobra-la from the infectious spores? Why not send a dedicated team of Cobra-la scientists and demolition experts to do the job? They created the spores. They know better than anyone what would happen if the spores entered the dome and transformed everybody into mutants. Why trust some idiots with a grenade and with a history of mishaps to do the job? 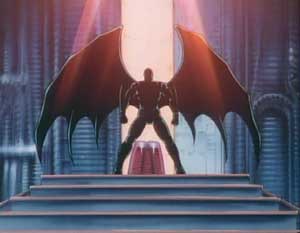 Cobra-la wasn't military at all. There were no vehicles to pit against the G.I. Joe forces. They had flying things that looked like flying fishes and puffers floating and spewing something that looked like vines. The coolest character, Nemesis enforcer looked like a purple Batman. The Royal Guards looked like they were Middle Eastern cavalrymen dressed for a ceremony. Cobra-la had nothing to do with G.I. Joe.

Cobra-la's problem was that the movie etched it on Cobra, which up to that point had been a strict terrorist organization with a military rule. They had ranks, troops, tanks and officers. Furthermore, Cobra-la broke the greatest G.I. Joe's mysteries, the identity of Cobra Commander and what he looked like. We always assumed that he was disfigured, but we never knew. Cobra Commander worked better as an enigma.

According to an interview given by Buzz Dixon at joeheadquarters.com, Sunbow's writers and editors proposed two ideas to Hasbro, the toy company behind the G.I. Joe toys that paid for the film and the cartoon. The first was about Cobra's chief of staff wanting to replace Cobra Commander with a new leader. The second was that Cobra Commander had been the front man for another secret organization. 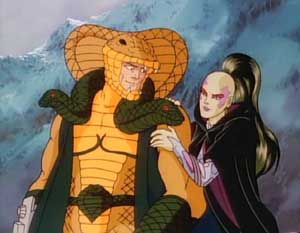 Hasbro chose to mix both ideas. The result was that Golobulus masterminded the creation of Serpentor, the Cobra Emperor created from the DNA of history's major leaders by Destroy and Dr. Mindbender by implanting a psychic motivator in the latter. Serpentor was not the most loved aspect of Cobra or its best idea. Etching Cobra-la on the weak link of G.I. Joe did not help Golobulus and company very much.

No matter how much most fans hate Cobra-la, there are fans like me who just love the thing! Cobra-la was different and not much related to the original theme of G.I. Joe. However, taken alone, outside the Cobra and G.I. Joe's universe, it was a very creative and well-executed creation. Having crustacean as armor plates was smart. Using a spider web as monitor screens was as inventive.

Then, there were the characters. Every scene in the movie introducing the Cobra-la gang was cool. It's the follow up and the end of the movie that isn't. What were once impressive characters, capable of defeating G.I. Joe, turned into weaklings in the last 20 minutes of the film. With a couple of kicks in the gut, Sgt. Slaughter defeated Nemesis Enforcer, who can lift a Havoc tank.

One of the most mesmerizing scenes in the movie is the first confrontation the Joes have with the Cobra-la royal guards. Dressed with bright red uniforms, humming the words "la la la la la" like an African tribe, attacking their opponents with large machetes and sporting helmets that resembled an ant's head made them cool, in comparison to the regular Cobra troops whom the Joes were always kicking around.

When the Cobra-la royal guards beat some best martial artists of the G.I. Joe team, like Snake Eye and Quick Kick, the movie raised all expectations. The introduction with Pythona sneaking inside the Terror Dome like a cat burglar was innovative. We had seen the Joes enter Cobra's hideouts several times, yet, it never had that much impact. Pythona really tested the best Cobra had.

Golobulus was the first qualified Cobra leader. Cobra Commander had always been a coward and a lunatic. Serpentor looked like a big baby used to having things done his way. Even when Lt Falcon punctured Golobulus' eye, there was something noble about him. He wasn't as trusting of Serpentor. He often doubt his creation's competence. 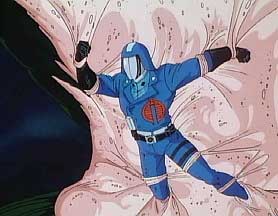 My favourite Cobra-la character was the one who didn't act like a Cobra-la citizen at all, Cobra Commander. The film gave the him depth and made us care about him. From the initial shot in the throne room to the end, when he saved Lt Falcon, I was rooting for him. Deemed an idiot and seemingly alone and without any supporters, he defied all of Cobra and Cobra-la and helped save the day with G.I. Joe.