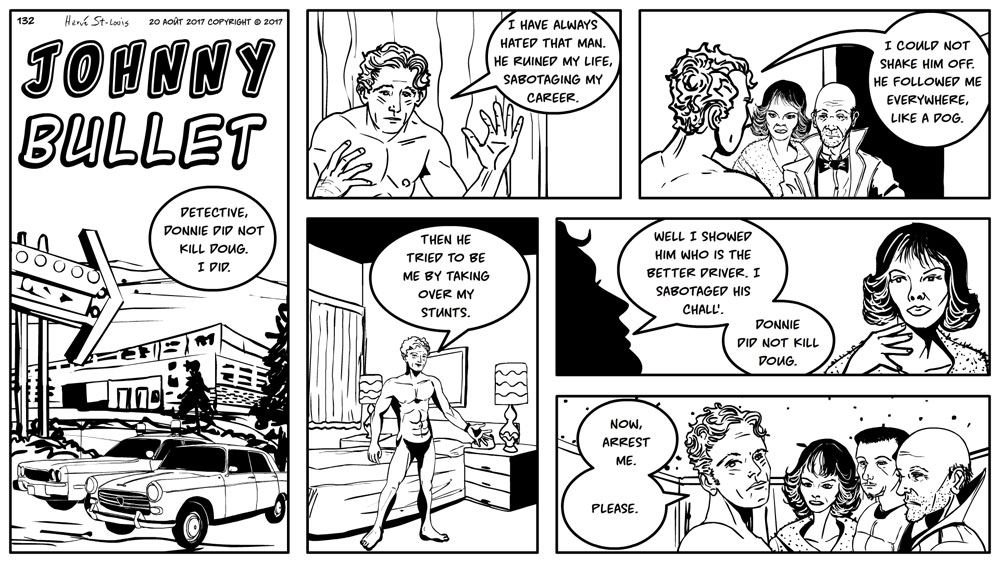 22 pages times four chapters gives us an 88 pages volume which is on the lower side of the traditional North American trade paper back comic compilation. With the two extra chapters, I think that it is a beefier proposition.

From a graphic perspective, the drawings in Johnny Bullet are more confident in chapter five and six. Johnny and his cast are better defined visually. It is often said in literature that characters at a given moment take over and dictate the narrative. In the case of Johnny Bullet, the characters took the control of the visuals slowly and finally revealed themselves. Johnny Bullet, Donnie, and Sergei as seen in the early pages are very different from their current looks.

One criticism I received about Johnny Bullet is that his looks keep changing throughout the comic. I do not perceive this as a weakness. Instead, it demonstrates an improvement of the comic strip. Once I figured out that Johnny Bullet was not a clone of Steve McQueen, he slowly revealed himself to me and the readers of this comic!

If you follow me assiduously, you will know that I am finishing my PhD. I had always promised to print the first volume of Johnny Bullet when done. I am glad that now I have a complete project waiting for me after my approaching defence.

I do not know when I will launch the first printed volume of Johnny Bullet, but I will probably use Kickstarter to raise sufficient funds to pay for that. Maybe the first volume will be released at the Toronto Comic Art Festival, in my home town, in May 2018. It is a great comic festival/convention.

I want the first printed volume of Johnny Bullet to be in colour. I am currently performing many tests to improve and determine what I want. I am quite particular because I do not want traditional colouring for this project. I prefer watercolours with an overexposure of colours and contrasts.

I redraw full of old Johnny Bullet strips constantly. I do not redraw everything, but there are plenty of adjustments. I retype the lettering and rewrite the texts constantly as well. For me what will remain on the website will be a testament of what I have accomplished originally. The book will be of better quality. From the beginning, it was my plan that colour be exclusive to the print edition.

So, what's the future for Johnny Bullet? As you can see above, his adventure is only beginning with him confessing of having murdered Doug Hawthorne! My plans for Johnny continue. I would like to continue this comic for several more years; for the rest of my life, if possible. It is really a project that came to me without preparation. I started to work on it without expectations of quality or usual hang ups. There are so many adventures that I can relate with Johnny!

Obviously, Johnny Bullet returns next week. I encourage you to come back and read his adventures. If you like or do not like something, tell me by email or below in the comments. Subscribe to my newsletter too. I like to receive comments about the comic.